The Grundy Center High School activity director flips through the fragile pages, stained brown with age, pausing at the pages that list the rivalry with Gladbrook-Reinbeck.

The first entry is 1920, when Reinbeck and Grundy Center played football. The most recent, and presumed last, is 2017. From 1968 on, the scores were recorded here by hand.

Friday had a sense of finality. Shrinking enrollment is causing Gladbrook-Reinbeck, a team that has won back-to-back state championships, to switch from 11-player to 8-player football next season. There’s no way they’ll face each other when Grundy Center still has an 11-player program.

In the Battle for the Bell, Gladbrook-Reinback went home with the hardware one more time. The result brings the series to 47-42-9, in favor of the Rebels.

“We’re going to put it in the trophy case, because no one’s taking it away,” Gladbrook-Reinbeck coach John Olson told his players in a post-game huddle.

For almost a century, the programs played in one of the longest annual rivalries in the state. It was older than Grundy Center’s high school building, which was constructed in 1957.

The slow trickle of dwindling enrollment did.

Reinbeck and Grundy Center are towns located 9 miles apart. Gladbrook, which later joined with Reinbeck for the 1988-89 school year, added to the rivalry.

Friday night had a historic-last-game feel to it. Alumni from both schools were honored on the field.

For the most part, the series has been intense, but also based on respect for one another.

“Everybody in town shuts their doors and comes to the game,” Breyfogle said. “It’s definitely a part of this community.”

Des Moines East and North own the state’s longest continuous football rivalry. They’ll meet for the 115th time Sept. 15. It’s one of the longest streaks in the nation.

There’s the Highway 5 Rivalry, which will be played for the 106th consecutive year between Albia and Centerville Oct. 6.

Perry and Jefferson (now Greene County of Jefferson) will meet in the Cow Bell Game for the 90th time Oct. 13.

At times, it was like the Montagues and Capulets in cleats. At others, there was gentle teasing between people in the communities.

Nearly 1,000 fans attended Friday’s game, crowding into the bleachers and ringing the chain link fence around the field.

“It’s going to be the game that people talk about 20 years down the road,” Gladbrook-Reinbeck senior Gage Murty said.

The communities share a long history outside of sports. When Reinbeck’s school board was considering reorganizing with another district, it approached Grundy Center first, said Harry Dole, a former principal who still lives across the street from Grundy Center High School. 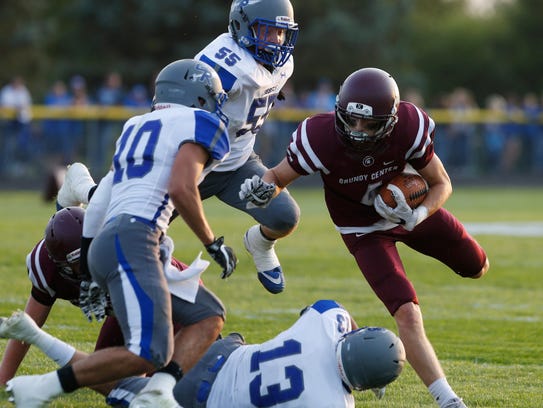 It went with Gladbrook instead.

Iowa had many more rivalries between towns years ago. A switch to district football for most classes in 1992 eliminated many of them.

But hype and anticipation of the matchup between the Rebels and Spartans hasn’t. Grundy Center placed a sign in the school weightroom counting down the days to the game from 100. The dry erase board was wiped and renumbered daily. On game day, it was left blank.

The season opener thrilled students from both schools.

“You could almost compare it to homecoming,” said Sadie Cahalan, a Gladbrook-Reinbeck cheerleader. “The football players are nervous, the cheerleaders are excited, the students are eager to get to the game Friday.”

Gladbrook-Reinbeck player Mason Skovgard was agitated before the game, his father said.

“He paced back and forth for about 15 minutes before we got him to calm down,” Erik Skovgard said.

Players from both teams looked forward to the rivalry for years.

“It was one of my biggest football thrills, looking up to them like they were rock stars,” Hook said.

At the end of the game, Gladbrook-Reinbeck’s 24th consecutive victory dating back to 2015, Mason Skovgard heard the bell ringing as teammates carried it off the field, for what appears to be the last time.