No. 7 Greensboro Day stuns No. 2 IMG Academy in DICK's quarterfinal

No. 7 Greensboro Day stuns No. 2 IMG Academy in DICK's quarterfinal

RELATED: Five things we learned Thursday at the DICK’S Nationals

“Bam Adebayo (now at Kentucky) hit a last-second tip-in to beat us and before I could get to the locker room, J.P. had huddled the team together and said we would come back and win state and go to DICK’S Nationals,” Bengals coach Freddy Johnson said. “That’s been our goal since last February.”

The Bengals, in their second trip to the DICK’S Nationals, didn’t come this time as tourists. Greensboro Day, the No. 19 team in the Super 25 boys basketball rankings, defeated No. 4 IMG Academy (Bradenton, Fla.) 59-40.

It was the first time that a team from North Carolina won a game at DICK’S Nationals and it may have been the biggest upset ever in the tournament, eclipsing Findlay Prep’s quarterfinal defeat in 2011 to Dwyer (Fort Lauderdale).

IMG, whose basketball program is only a few years old, was playing in its first DICK’S Nationals. The Ascenders’ only other loss was to Montverde Academy (Montverde, Fla.).

“I knew I was capable of making shots,” said Perkins, a 6-1 guard who is a North Carolina Central commit. “I told my team I was going to make three threes (he made three of five in the game). My teammates know what I’m capable of.”

IMG coach Vince Walden said a few key stops could have made a difference down the stretch. The Ascenders (26-2) were led by Trevon Duval with 14 points, but a day after playing in the McDonald’s All American Game in Chicago, Duval had an uncharacteristic eight turnovers and was scoreless in the second half.

Greensboro Day led 44-36 when Perkins stuck the knife in IMG’s hopes. He hit a three-pointer, grabbed the rebound down the other end and followed up with another three-pointer. A moment later, Duval fouled out and it went downhill from there for the Ascenders.

“That one possession, they get a couple of offensive rebounds and then No. 12, Perkins, makes the three and that hurts,” Walden said. “They out-rebounded us and that is an area we have dominated 85% of the time this season.”

Johnson, like Walden, did a lot of scouting of his opponent on video.

“We watched them six games on tape and we knew a lot about them,” Johnson said. “They are very well coached. Our key was not to allow them to get going in transition.”

Moorman said having several players return from having played in the 2015 DICK’S made a difference.

“Having those guys with some experience, it was definitely a different energy and vibe,” Moorman said. “The last time, we were happy to be here. This time, we were preparing hard for two weeks.”

Greensboro Day swarmed IMG on defense in the first half and it paid off. The Bengals led 17-10 after one quarter and grew the lead to 33-18 by the half, holding the Ascenders to 40% shooting and out-rebounding IMG 16-14.

IMG had a big third-quarter, though, going on a 13-0 run to tie the score at 31, punctuated by a dunk by Keyontae Johnson.

Moorman, a Temple signee, was a big factor for Greensboro Day with 11 first-half points. IMG was paced by Duval with 14 points in the first half, but none of his teammates had more than three points. 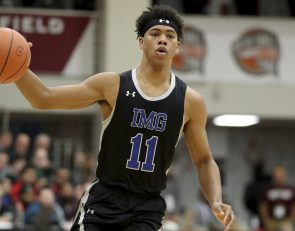 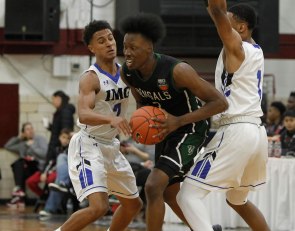 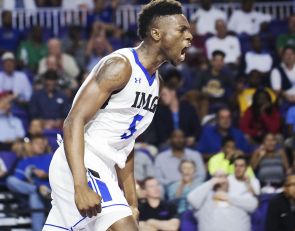 https://usatodayhss.com/2017/no-7-greensboro-day-stuns-no-2-img-academy-in-dicks-quarterfinal
No. 7 Greensboro Day stuns No. 2 IMG Academy in DICK's quarterfinal
I found this story on USA TODAY High School Sports and wanted to share it with you: %link% For more high school stories, stats and videos, visit http://usatodayhss.com.