If football teams in Pennsylvania have learned anything in recent years, it is to never doubt St. Joseph’s Prep (Philadelphia). The country’s No. 7 team once again proved its mettle in Friday night’s Class 6A state semifinal vs. Coatesville.

With a trip to the Pa. Class 6A state final and a long winning streak on the line, and the Hawks trailed Coatesville by 18 early in the third quarter. As they have done so many times before, though, the Hawks were the last ones standing.

St. Joseph’s fought back to take the lead early in the fourth quarter, kept its foot on the gas and then held on for dear life in a wild 53-49 win in Downingtown, Pa.

The Hawks (13-0), now winners of 27 straight games, will go for their fourth state title in five years next weekend in Hershey. Coatesville finishes its season 13-2.

St. Joseph's Prep comes back to beat Coatesville, 53-49, in a classic. The Hawks are back in the PIAA Class 6A championship game. https://t.co/2obYR27iZE

St. Joseph’s quarterback Marquez McCray ran in three touchdowns early in the second half to help get points on the board during the comeback. When Coatesville quarterback Ricky Ortega hit Aaron Young for a 23-yard TD just 90 seconds into the third quarter, Coatesville had a 28-10 lead and momentum on its side.

St. Joseph’s struck right back, though, putting together a drive that ended with a 16-yard TD run by McCray that made it 28-18 after the two-point conversion with 8:36 to go in the third quarter. Coatesville’s Dapree Bryant then too the ensuing kickoff to the St. Joe’s 30. Soon after, however, Ortega was picked off by Dawson Deluliis, who returned it 72 yards to set up an 18-yard TD pass from McCray to James Cherry and cut the deficit to 28-25 with 7:25 to go in the third.

Coatesville scored again to go up 35-25 with 6:23 to play in the third. They did not get comfortable. St. Joseph’s then proceeded to rattle off the next 28 points to take a 53-35 lead. Coatesville then scored the next 14 before time finally ran out as St. Joseph’s hung on for a well-earned 27th consecutive victory.

In next weekend’s Class 6A final in Hershey, St. Joseph’s will face the winner of Saturday’s Pine-Richland (Gibsonia)/Manheim Township matchup. 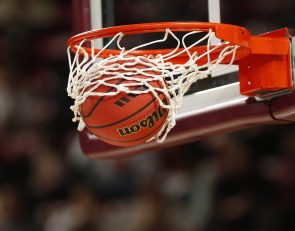 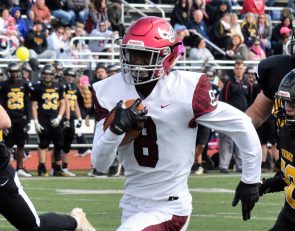 The Hawks win a wild one.