Now a state finalist, tiny Tindley says 'We belong with anybody'

Now a state finalist, tiny Tindley says 'We belong with anybody'

Tindley’s Eric Hunter moves the ball against New Washington’s Brandon Horton and Stevie Mack Saturday, March 18, 2017 during the Class A basketball semi-state championship in the Tiernan Center at Richmond.

RICHMOND –
p.p1 {margin: 0.0px 0.0px 0.0px 0.0px; font: 12.0px Cambria}span.s1 {font-kerning: none}
Tindley coach Bob Wonnell couldn’t even take two steps. His team had just won its first semistate title in program history. He had to get to the interview room. He kept getting stopped.

Hugs. Handshakes. A few steps. More hugs. Another handshake. There’s a pat on the back. Everyone wanted a piece of Wonnell, to say congratulations. Thank you.

He finally made it up the stairs with his two star juniors, Eric Hunter and Hunter White. They finally got a chance to sit down and breathe.

First Wonnell said: “I feel like we’re in March Madness. This is crazy.”

Then he started talking to his players about Lafayette Central Catholic, who the Tigers will face in next week’s Class A state title game after Tindley’s 64-50 win over New Washington. It marks the Tigers’ first appearance in the state finals.

“We’ve got to stay hungry. Our goal has never been to get there,” Wonnell said.

This is the line Tindley walks: Enjoy it — how can the Tigers not, they’re making history — but keep focusing on the next step. They’re running out of next steps.

Tindley’s Hunter White cuts down part of the net after beating New Washington Saturday, March 18, 2017 for the Class A basketball semi-state championship in the Tiernan Center at Richmond.

Hunter, who paced the Tigers with 23 points, is already thinking about next week.

“These are just games along the way for us to get to where we want to be,” he said. “We just want to cut the nets down at Bankers Life.”

The Tigers advanced to the state finals by doing what they’ve been doing for weeks — outlasting and overpowering opponents.

Tindley got out to a 7-0 lead, but the Mustangs cut the deficit to 19-15 heading into the second quarter. The Tigers led by six at halftime and by 10 midway through the third, but New Washington made it a two-possession game heading into the final quarter.

The Tigers iced the game at the line, hitting 12-of-16 in the second half. Though the Mustangs cut the deficit to one multiple times, Tindley led from buzzer to buzzer.

Wonnell and the Tigers have been waiting for this. Success has been steady for the Tigers — just two losing seasons in the past 10; 15 or more wins seven times; three sectional titles in the past three years. But this? This is something new.

“We’ve been beating at the door,” Wonnell said. “It took a hungry, fearless attitude. There was a time when it was, ‘We’re Tindley, we don’t belong with you guys.’ That’s dead. We belong with anybody.”

While Tindley was wrapping up its win over the Mustangs, Wisconsin was knocking off the defending national champion Villanova in the NCAA tournament. Wonnell said he predicted the upset. But he also knows that March Madness can wait. He has film to watch. The Tigers have business to take care of.

“I’ve never cared less about a bracket in my life than the one I filled out Wednesday night,” he said. “I love this and don’t want it to end.” 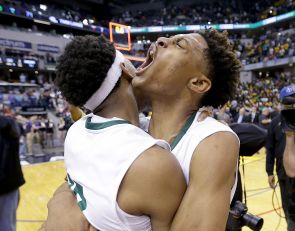 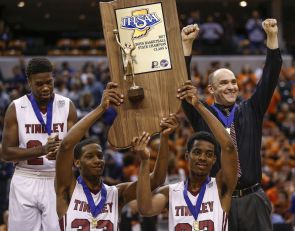 Doyel: Tindley was a champion before this game even started 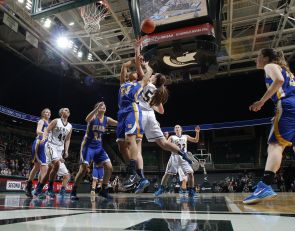 https://usatodayhss.com/2017/now-a-state-finalist-tiny-tindley-says-we-belong-with-anybody
Now a state finalist, tiny Tindley says 'We belong with anybody'
I found this story on USA TODAY High School Sports and wanted to share it with you: %link% For more high school stories, stats and videos, visit http://usatodayhss.com.