It’s been 22 years since the O’Gorman girls basketball team last won a state title. They’re about to get another crack at it. 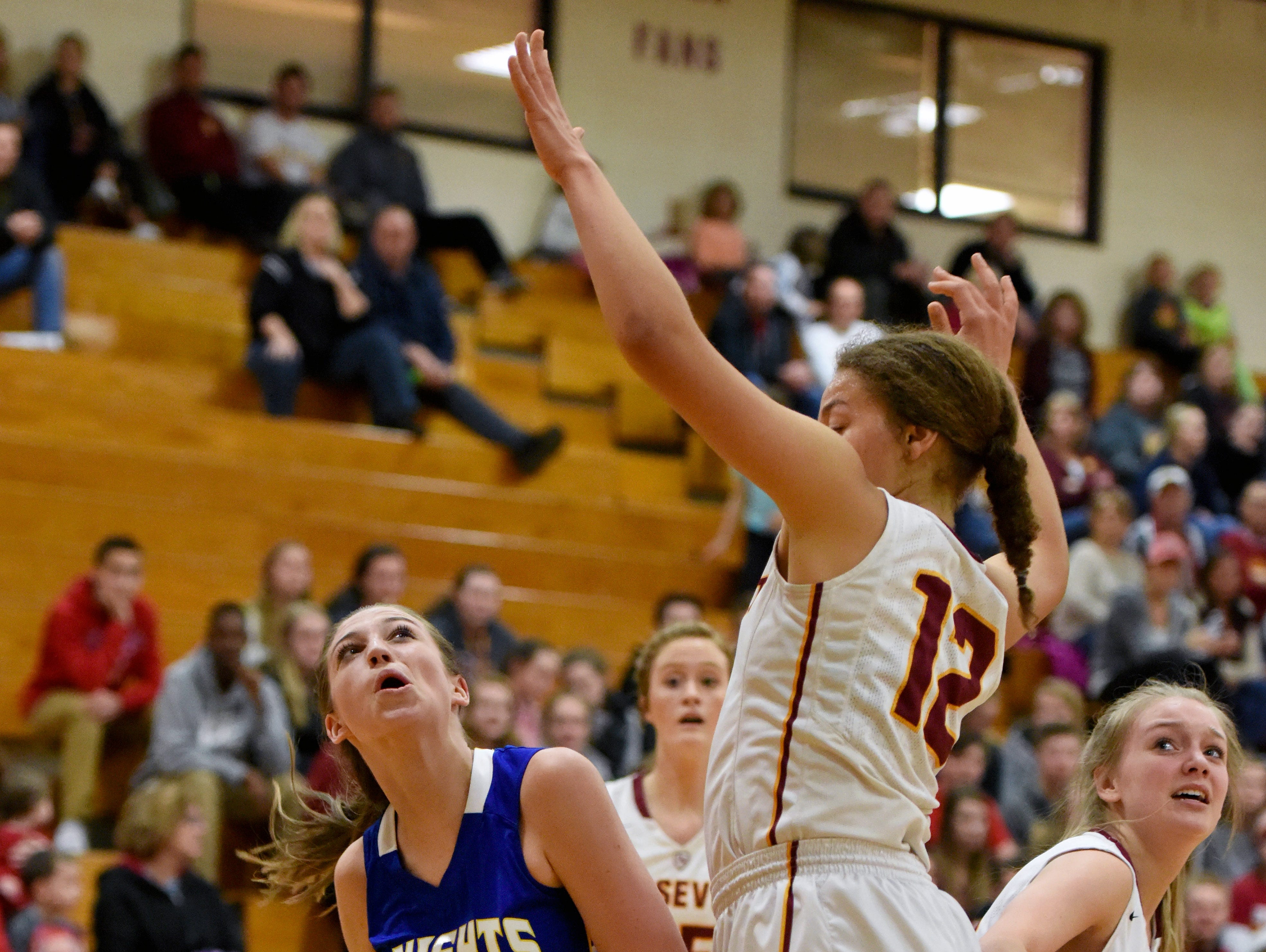 O’Gorman’s Emma Ronsiek looks toward the basket while Roosevelt’s Kira Ward guards during their game Thursday at Roosevelt High School.

The Knights used a suffocating defense throughout the night, a big run in the third quarter, and an inspiring effort from Sebastian Akoi to knock off District 1AA top-seeded Roosevelt in what turned out to be a wild finish, 50-38. The win snaps a 10-game winning streak for Roosevelt.

Akoi led all scorers with 20 points on 9-of-16 shooting. She also recorded four rebounds, two blocked shots, two steals and an assist. And she did it all after picking up two first quarter fouls.

“I thought she played tremendous tonight,” said O’Gorman coach Kent Kolsrud. “When she shows up and plays with that kind of enthusiasm, our kids just feed off of that. She needs to play with high-energy all the time, and I think she did tonight. Our kids did a great job of getting her the ball in the post. She did a tremendous job of finishing.”

Akoi filled up the stat sheet in the opening quarter. Unfortunately for the Knights, that included the Personal Fouls line. She had eight points in the opening quarter and was everywhere on the floor. With fifty-one seconds to play in the first, Akoi made a great defensive play by deflecting a pass in the lane. She then ran the floor and was rewarded with a wide open layup, scoring her eighth point of the quarter. Moments later, she picked up her second foul and played sparingly in the second quarter.

But along with Akoi’s outburst on offense, it was O’Gorman’s defense that set the tone. Roosevelt scored just 15 second-half points, including just four in the final quarter. The 38 points scored matches the lowest scoring output for the Riders vs. a South Dakota school this season.

“To win championships, you need to be good on the defensive end,” Kolsrud said. “I thought we did a tremendous job on a great offensive team.”

Roosevelt does have its share of scorers, but against O’Gorman on Thursday, they were stymied. Tahia Metzel led the Riders with 11 points. She was the only Roosevelt scorer in double figures, and the Riders shot just 30-percent from the floor in the second half.

“I’m just really proud of this group. The way they’ve progressed, accepted their roles, the way they’ve tried to improve at every single practice and every single game,” Kolsrud said. “We feel like the last couple of weeks that we’ve been playing really good basketball and I think we’re peaking at the right time.”

O’Gorman (11-11) led by seven early in the second quarter when Akoi scored to make it 15-8. But Washington responded and took the lead at the buzzer when Taylor Bonestroo buried a deep 3-pointer. It was Roosevelt’s first lead since 8-6 in the first quarter.

The Riders (16-6) built the lead to 31-28 early in the second period before O’Gorman reeled off nine straight to take a 35-31 lead. The run was capped by an Ashlee Beacom 3-pointer. She finished with 14 points for the Knights. The Knights never trailed the rest of the way.

“I was proud of the way we responded to adversity,” Kolsrud said. “That 3-pointer at the end of the half was big, and we did a nice job of regrouping and coming back. That’s something we’ve done the last couple of weeks. We’ve responded to deficits and adversity. It shows a lot of character to be able to respond to those situations.”

Trailing 40-36 late in the game, Roosevelt applied a full-court press, and it worked. O’Gorman was called for a backcourt violation and a traveling call in the backcourt on consecutive possessions. But, the Riders failed to score on both turnovers. The momentum was gone, but the tempers were not.

Arguing a travel call against the Riders, Roosevelt coach David Maxwell received back-to-back technical fouls and was ejected from the game. Beacom hit 3-of-4 fouls shots from the technical foul. Over the final minute, Beacom was 6-for-8 from the line to seal the win.

https://usatodayhss.com/2017/ogorman-reaches-state-with-1aa-district-title
O'Gorman reaches state with 1AA District Title
I found this story on USA TODAY High School Sports and wanted to share it with you: %link% For more high school stories, stats and videos, visit http://usatodayhss.com.