INDIANAPOLIS – In the course of a 45-minute conversation about his life, Immanuel Knox pauses a few times and smiles. He knows this story — it is his own, after all. But even Knox seems surprised at some of the details as he relays them.

How Knox arrived here, a senior at Lutheran High School and key defensive player on the Saints’ Class A third-ranked football team, is a credit to his own perseverance and resilience. It would have been easy to miss the school bus on those mornings when he slept in the hallways of an apartment building that was not his. Life could seem dreary with a father out of the picture and mother in jail. One night, in the darkness of the Parkhaven Apartment building near East 21st Street and Franklin Road, Knox was asked by a resident if he was homeless.

The woman asked why he was smiling. Knox answered that he had faith.

“I never thought I was in bad trouble,” he said. “I always thought God was on my side.”

Knox, 18, has lived a life unlike most of his Lutheran classmates and football teammates. He is in a good place now. God may be on his side, but he also had a guardian angel.

Immanuel spent his early years in Tallahassee, Fla. There are not a lot of great memories.

“My home life was more abuse than anything,” he said. “My mom never really cared for us.”

When Immanuel was 8, Child Protective Services took Knox and his brothers and sisters out of the house and placed them in foster homes in Tallahassee. Immanuel was paired with his older brother, Cornelius. After a year-and-a-half, when Immanuel was 10, his aunt, Jonnie Thomas, took custody of the Knox kids and moved them to her home at Wellington Village Apartments on Indy’s east side.

One of the first things Thomas did was sign the Knox kids up for the Big Brother program. Their father, Sam Knox, was nearly 80 years old at the time and still living in Florida.

“My auntie wanted me to have a father figure in my life,” Immanuel said. “My dad wasn’t around. My mom was in jail.” 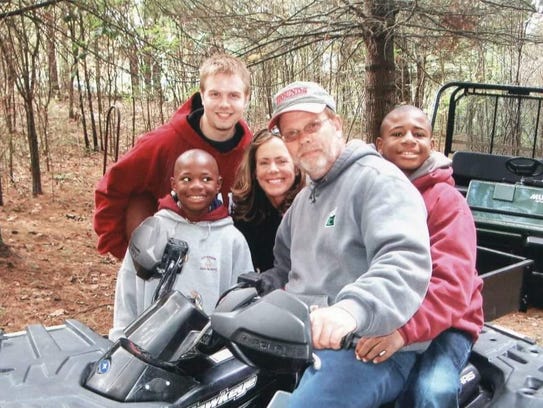 Mark Reed had been involved with the Big Brother program once before. Then in his early 50s, the self-employed Warren Township resident was raising a teenage son, Zach, with his wife Debbie. There was an immediate match with Immanuel.

“I think it was divine intervention,” Reed said. “We had a great relationship right away. We always raised our son that the color of someone’s skin doesn’t matter. It’s amazing when you open your heart and arms the matches that are readily available.”

The Reeds took Immanuel and his younger brother, Moses, on trips to Brown County. Immanuel attended his first Colts game with the Reeds. He and Zach Reed, who has autism, developed a close bond. Some of Immanuel’s favorite memories are watching WWE on Friday nights with the Reeds.

“It was exactly why you get into it,” Reed said. “He is a resilient kid, he just needed an opportunity. He’s so hungry for everything because he’s never had anything.”

Reed helped introduce Immanuel to the Junior Saints football program, where he became one of its best players. He transferred from Stonybrook Middle School in Warren Township to Trinity Lutheran in eighth grade.

Samuel Knox died on Aug. 17, 2013. He was survived by 18 children, Immanuel among them. He attended the funeral in Ripley, Miss., but did not have much of a relationship with his father.

“He wasn’t a great father,” Immanuel said. “But when I was younger he taught me some valuable lessons like saying, ‘Yes sir, no sir’ or holding doors open for women. Simple things. I think most people just felt sorry for him, though. He wasn’t a person I’d call a role model.”

Aunt Jonnie, Knox’s sister, provided discipline in their home. But it felt suffocating at times, too. He was not allowed to play football when he transferred back to Warren Central as a sophomore.

“I couldn’t argue,” Immanuel said. “You did what she said.”

It was during his junior year that Immanuel left his aunt’s home. First, he lived at a friend’s house. “I helped out around the house,” he said. “But they didn’t have much money and I started to feel like a nuisance.”

He lived with his older brother (and his guardian for a while), Cornelius. It was around that time that he ended up in the hallway at Parkhaven. He said that setup lasted about three weeks. But he never missed the school bus.

“People would ask why I was wearing the same clothes,” Immanuel said. “I said, ‘Well, this is the style of clothes I like to wear.’ I’m a guy that has a lot of pride. I didn’t want to stay with anybody.” 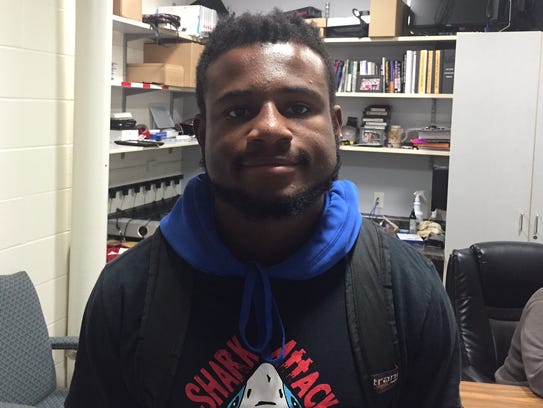 Immanuel finished the second semester of his junior year living with the Reeds. Mark and Immaunel’s aunt Jonnie always had a good relationship. Mark knew the living situation would be a short-term solution, but was better for Immanuel than bouncing from place to place.

“His aunt is a strict disciplinarian but she loves him,” Mark said. “Those fences have been mended moving forward and nobody wanted that more than aunt Jonnie.”

In July, Immanuel moved into the home of Rich and Cara Hougesen, just a few blocks from Lutheran. He transferred back to the school where he started as a freshman. These four months have been by far the most prolonged structure Immanuel has experienced.

“A lot of my childhood, I missed out on,” he said. “Right now, this seems a little too good to be true. Sometimes I back away and I’m not really accepting. It seems like when something good happens, it always gets taken away.”

Cara Hougesen had first come to know Immanuel when she worked at Trinity and he was a student. They had kept in touch through the years. They visited in person after Immanuel had bounced around from home to home.

“You could tell he needed to be out of that situation,” Cara Hougesen said. “You could see it in his eyes. So we started to see what it took to get him in with us.”

The Hougesens have three sons – Japheth, 27, Caleb, 25, and Seth, 20. Shortly after Immanuel moved into the home, Cara told him he did not have to address them as “Mr. and Mrs. Hougesen.” She was thinking of something along the lines of “Miss Cara.” Immanuel had another idea.

“How about Mom and Dad?” he asked.

Lutheran coach Dave Pasch said he can see a difference in Immanuel. He seems more at ease, more confident, than he did as a freshman.

“I don’t know if his teammates know all the details of his life,” Pasch said. “I think they have some understanding that he’s probably not as privileged as a lot of them. But how he deals with the hurdles that come his way is beyond his years.”

Immanuel said he never thought about quitting school, even when he was sleeping in the apartment hallway. He credits his aunt Jonnie for pounding the importance of academics into his head.

Pasch said Immanuel could probably play at the Division III level in college if he wanted to pursue football. But he has his sights set on the Air Force.

On senior night at Lutheran, the man who helped Immanuel set those plans walked with him on to the field. Mark Reed might have started out as a Big Brother to Immanuel, but their relationship is so much more.

“He’s a son to me,” Mark said. “As you look back and see how the road map fell together, we know what it means to him to achieve the things he has achieved. I’m living through him as well. Hugging him after he won the sectional championship meant the world to us. Now we have to figure out that next chapter for him.”

“I always thought God was on my side.”