Given the events of the day, her excitement was understandable. 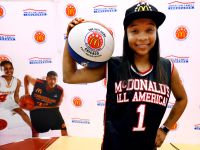 Riverdale’s Anastasia Hayes was presented with her McDonald’s All American jersey and hat. (Photo: DNJ.com)

On the same day Hayes received her McDonald’s All-American jersey in a formal presentation at Riverdale, she was also named one of the five finalists for the prestigious Naismith High School Girls Trophy.

The University of Tennessee signee had already been named one of the 50 players on the preseason watch list and then one of the 10 midseason finalists for the national award, given by the Atlanta Tipoff Club to recognize the best high school girls player in the country.

“I was nervous about today, but then once I got (to school), I felt fine,” said Hayes, donning her McDonald’s All-American jersey. “I was pretty anxious.”

Riverdale’s Anastasia Hayes was puts on her McDonald’s All American jersey. (Photo: DNJ.com)

The winner will be announced in early March.

The McDonald’s All-American games will be played March 29 at Chicago’s United Center. Hayes will be a member of the East squad.

“To get to play in the same game as some of the best, it’s a big honor,” said Hayes, who is a Tennessee Secondary Schools Athletic Association Miss Basketball finalist for Class AAA.

Her Lady Warriors are currently ranked No. 1 in the nation by USA Today and MaxPreps.

Riverdale’s Anastasia Hayes talks with Larry Flowers other members of the media after being presented with her McDonald’s All American jersey and hat. (Photo: DNJ.com)

“This is just a tremendous honor, not only for Anastasia, but for the Riverdale Lady Warriors,” said Riverdale coach Randy Coffman. “To be recognized nationally is great. What a great honor for Anastasia. It shows the younger players how hard work pays off.”

The 5-foot-7 point guard is the second Murfreesboro player in as many years to both be named a McDonald’s All-American and also be a finalist for the Naismith award. UConn freshman and former Blackman star Crystal Dangerfield achieved both honors last season.

Riverdale is currently 27-0, coming off Monday evening’s 57-55 win over Stewarts Creek in the District 7-AAA championship game. The defending Class AAA state champs are at home Friday night in the Region 4-AAA quarterfinals against Franklin County.

“I’ve got to stay focused and stay humbled and keep my mind on winning,” Hayes said.

Heritage Christian's Kaitlyn Gilbert: 'Mind-blowing' to be a McDonald's All-American