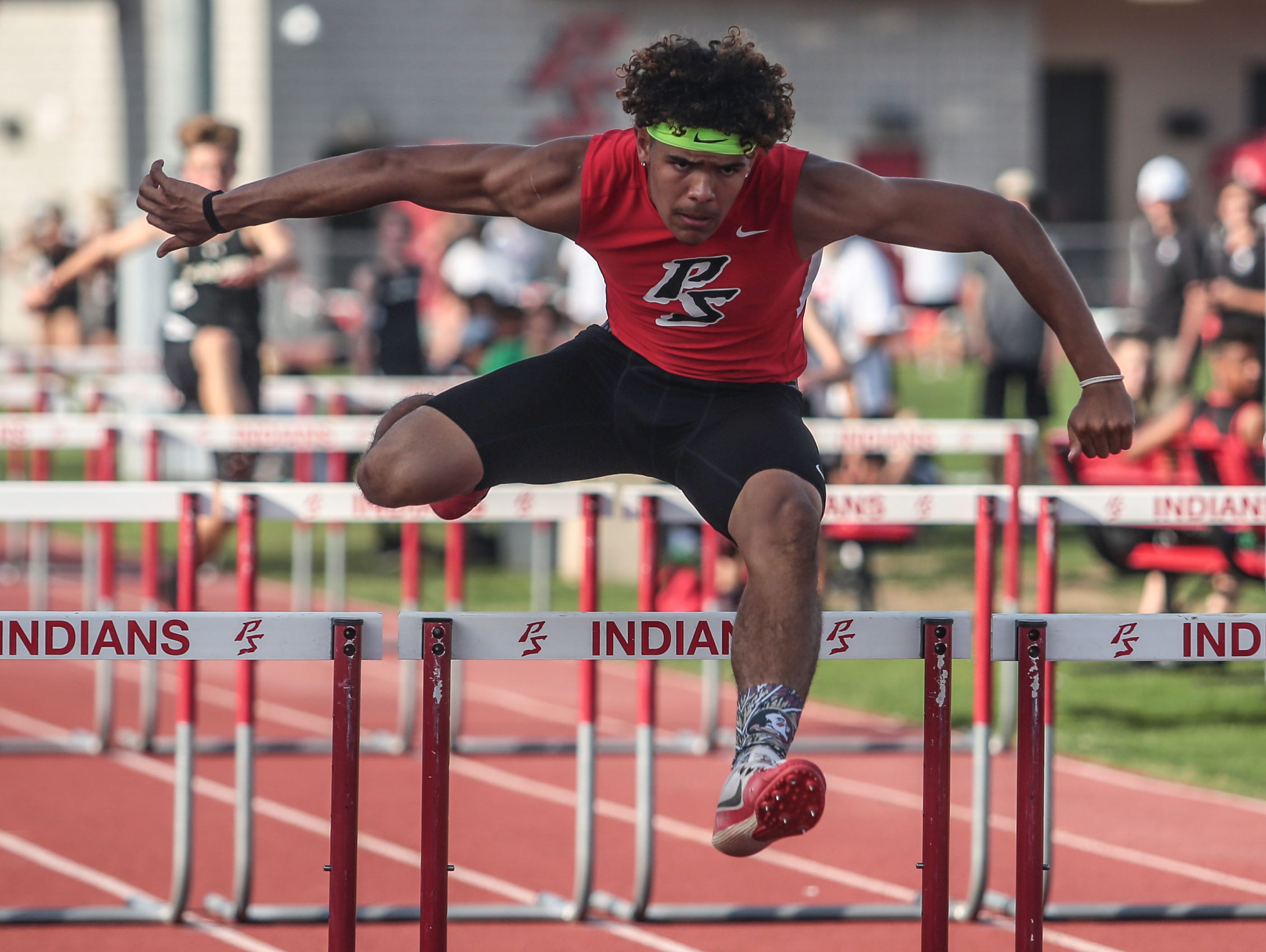 Palm Springs’ sophomore Andrew Clark is first in the 100m hurdles during a track meet with Xavier College Prep on Thursday, March 16, 2017 in Palm Springs.

Domanick Murray won both the 200- and 400-meter races and ran on the two winning relays teams as the Palm Springs Indians defeated Xavier Prep 78-49 in a Desert Valley League meet Thursday.

Cathedral City defeats Palm Desert: Winners for the Aztecs in the loss included freshman Liam Carr, who came closed to breaking the school’s 400 and Justin Kantowski in both the shot put and the discus. The young Aztecs squad posted several personal bests in the meet.

Isabella Fakehany won the long jump in 15-9, Kyleah Hawkins won the triple jump in 32-3/4 and Katelyn Jackson won the high jump in 4-10.

Palm Springs 69, Xavier 57: Dyana Miller and Maribell Wright were each double winners for the Indians in the close win over Xavier Prep.

Other winners for Palm Desert were Beverly Talakua (400), Estep and Arnson tying for first in the 3200, Melissa Brown in both the triple jump and high jump, Seline Schinke in the discus and the long jump and Charlotte Branco in the shot (for the second DVL meet in a row). The Aztecs clinched the win with many second- and third-place finishes.

Gonzalez won the 200 freestyle and 100 backstroke and was part of the winning 200 freestyle relay with Alessa Marquez, Arianna Barkley and Sequoia Bishop.

La Quinta 93, Shadow Hills 77: The Knights came up short in the Desert Valley League meet and will face Indian next week.

Shadow Hills 86, La Quinta 84: The Knights not only won the Desert Valley league match put managed their first-ever win over La Quinta in the meet.

Indio 4, Vista Del Lago 2: The Rajahs were led offensively by Erik Burciaga who was 3-for-4 with an RBI and a run scored in the win.

Christian Rodriguez was 3-for-3 with a run scored and Robbie Lopez was 2-for-4 with an RBI and a run scored. Bryan Esparza picked up the win on the mound, throwing seven innings, with four strikeouts and allowing just three hits and one earned run.

The Rajahs’ next game is at Shadow Hills High School on Tuesday.

Rancho Mirage 11, Cathedral City  7: The Rattlers were led in the non-league match by the doubles teams of Tanner Moy/Carter Victorio, and Alex Arias/Austin Robison, who each won all three of their sets.

One set win was contributed by Tanner Williams/Alex Fiero and Jesus Rosales/Steven Martinez.  In singles play, Daniel Whelan picked up two sets and Luis Velazquez one.

“It’s was the depth of our team that ultimately took its toll on them. We got two big wins from Tanner Russell and Hanull Joh at the No. 2 and No. 3 singles in the first round which gave us a 5-1 lead. Our doubles ran away with it from there,” said Palm Desert coach Brian Jacobs.

Desert Christian 227, 29 Palms 261: Harrison Yu fired a 37 to led the Conquerors to the non-league victory Thursday at Indian Springs Golf Club in Indio.

La Quinta 190, Indio 325: The Blackhawks won the Desert Valley League match at SilverRock Resort in La Quinta with Michael Choma firing a 1-under 35.

Indio was led by Aaron Delgado at 56, Jonathan Vargas at 66 and Jose Romero at 67.

La Quinta is 4-2 overall and 2-2 in the DVL. The Blackhawks host Elsinore in a non-league match at SilverRock on Monday.

Liu and Kim each shot 35 on the front nine of the North Course, while T.J. Wurtz and Adam Co each shot 37 and Ethan Waters shot 43. Bailey Spivak’s 45 was not used.

Freshman Jakob Dvorken of COD fought hard in his two singles sets but fell 6-4, 6-3. Freshman Joao Luiz Zillo Prado 0f Brazil had to retire from his doubles match due to injury, though he remains undefeated in completed matches for the year.

Freshman right-handed starting pitcher Jake Mesa had another strong outing, tossing seven innings, surrendering one run, walking one and striking out seven for his first win of the season.

Freshman second baseman Jerred Soriano went 2-for-4 with a run scored and freshman first baseman Quinton Bidon also went 2-for-4 on the afternoon. Bidon also pitched in relief getting a five-out save.

College of the Desert improved to 2-3 in conference, 5-16 overall. 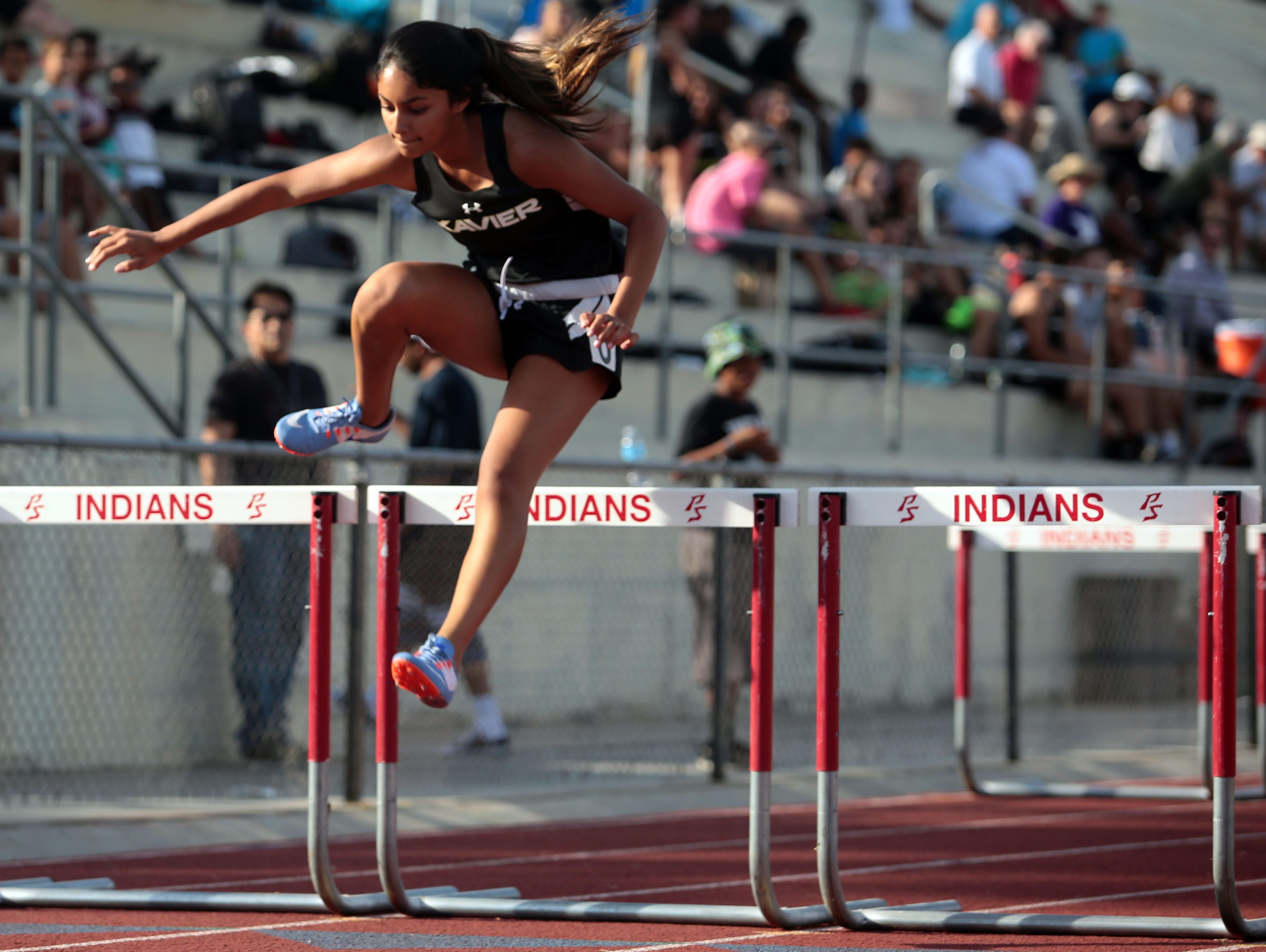 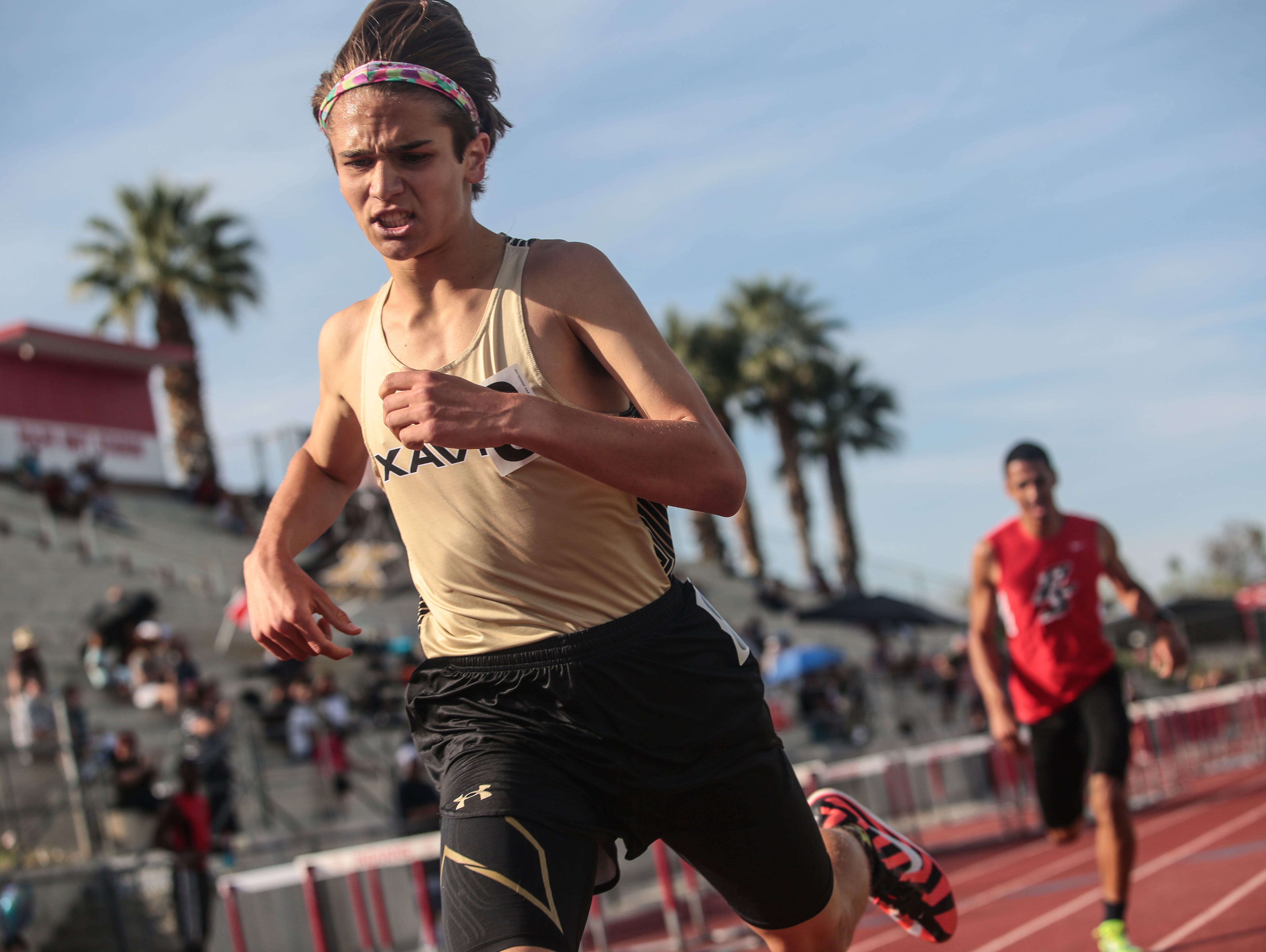