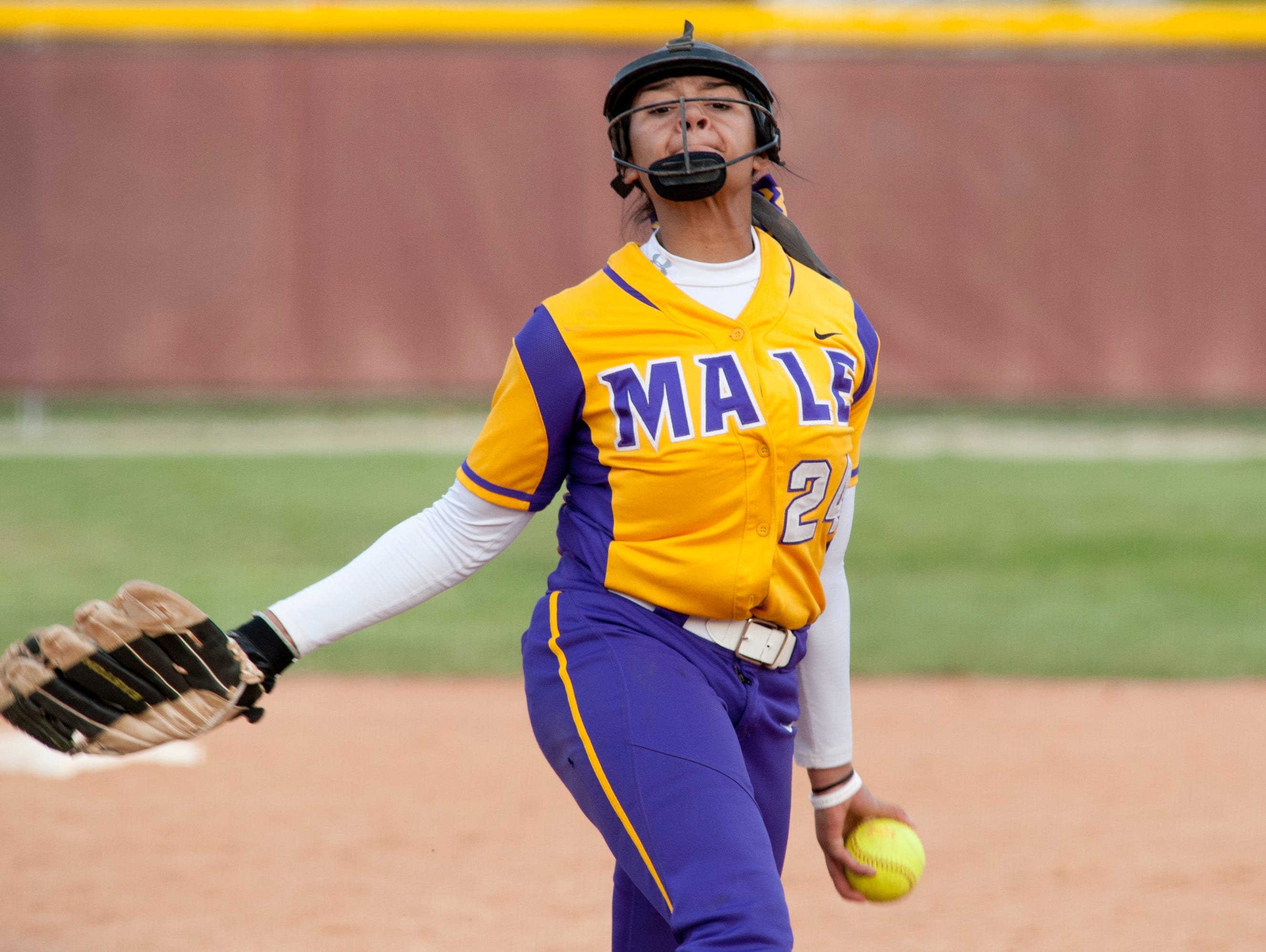 It may have been the Male High School softball team’s first game of the year, but the Bulldogs were in midseason form Tuesday night, even without their ace.

Male (1-0) pounded out 17 hits, including seven for extra bases, and rode the left-arm of freshman Jaelyn Sanders to a 14-3 win over host Holy Cross in a battle of preseason Top 20 teams and reigning region champs.

“I was really happy with the way we competed,” said Male coach Josh Bloomer, whose team is the four-time defending Seventh Region champion and ranked No. 4 in the Kentucky Softball Coaches Association Preseason Top 25. “We barreled it up pretty well tonight, I was really pleased. Any time you put 14 up, you’ve had a good night.”

Bloomer was especially happy with his team’s performance – in particular that of Sanders – in the absence of senior pitcher Olivia Suski. The Murray State-signee, who won 22 games last season, had minor surgery to repair a ligament in her right (pitching) arm a little over two weeks ago, according to Bloomer.

“They told us four to six (weeks), so we expect her late April, early May to be back and be going,” he said.

Sanders stepped in, and stepped up, with Suski out. The southpaw, who went 4-1 on the varsity last season as an eighth-grader, held the Cougars to three hits while helping her own cause at the plate, going 3-for-4 with four RBIs.

“We came into it knowing that Jaelyn was really, really good,” Bloomer said. “I told her before the game, ‘You have to embrace being the (number) one.’ She was the best player on the field tonight. She pitched, she fielded, she did it at the plate.”

After giving up an unearned run to the reigning Sixth Region champs in the bottom of the first inning, Sanders retired the Cougars in order in the second, third and fourth frames.

Meanwhile, Sanders was also aiding herself at the plate. She scored the Bulldogs’ first run after Alyssa Case followed her one-out single with an RBI-double to center field in the second. Then in the next inning, her RBI-triple highlighted Male’s four-run third.

“I started being nervous, then once we got out of the first inning and I hit the ball, I just started calming down and then I just started going on from there (and telling myself) ‘I got this. I can do this,’” said Sanders, who added an RBI on a fifth-inning groundout to push Male’s lead to 6-1.

No. 19 Holy Cross (1-2) plated two runs in the fifth to cut the Bulldogs’ lead to 6-3, but Male responded with an eight-run seventh that included Sanders’ bases-loaded, two-RBI bloop single.

Bloomer, meanwhile, thinks Suski’s setback could help his team be a more complete one by the end of the season.

“We really feel like once Olivia gets back and we have Jaelyn and Olivia, we’re going to be better than we would’ve been if we didn’t have to go through this,” Bloomer said. “We hate it for Olivia, but we think it can turn out to be a very good positive for us in the long run.”

https://usatodayhss.com/2017/sanders-steps-up-as-male-beats-holy-cross
Sanders steps up as Male beats Holy Cross
I found this story on USA TODAY High School Sports and wanted to share it with you: %link% For more high school stories, stats and videos, visit http://usatodayhss.com.