Beau Rosenthal and Drew Blair each scored 13 points for Stevens Point and Andrew Erdman added 11 going 3-for-3 from outside.

The Warhawks got a team-high 22 points from Trevell Cunningham.

Ben Seefeld was the only other player to score double digits for Arrowhead (22-6) contributing 10 points.

The Red Raiders left the Kohl Center with their first WIAA state title in 92 years.

Jordan and Johnny Davis each added six points off the bench for the Red Raiders.

The Bulldogs drained 11 3-pointers in the contest but could not matchup down low, getting outscored in the paint 26-4.

John Diener hit five 3’s and tallied 25 points in an encore to his 46 point-performance in the semifinal round for Cedarburg (25-3).

After coming up short in the title game the last two seasons, Xavier was finally able to clinch the first WIAA championship in school history.

The Cardinals jumped out to a 6-0 lead, which they held for the first 10 minutes of the game before the Hawks (28-0) came soaring back to complete the undefeated season.

Hunter Plamann led all scorers with 29 points, 18 coming in the second half for Xavier.

Nate DeYoung scored 18 points while grabing 18 rebounds for the Hawks and Sam Ferris chipped in 17 points.

Prescott (24-4) was led by their 7-foot-1 senior Owen Hamilton, who recorded 21 points, 16 rebounds and three blocks before eventually fouling out.

Luke Murphy tallied 10 points and dished out seven assists for the Cardinals.

By ending the game on an 18-2 run, the Eagles were able to win the school’s first WIAA Division 4 state title.

Leading the attack off the bench was Diovonte Caldwell, who totaled 14 points for the Eagles’ second unit.

Terrance Banyard scored a game-high 22 points for Destiny, while Sarion McGee chipped in 14.

The Golden Eagles won the first WIAA state title in school history with a record-breaking performance.

Not only did the 30-point victory break the record for largest margain of victory in Division 5, but by holding the Miners to just 28 points they also broke the record for fewest points allowed in a WIAA Division 5 State Tournament game.

Barneveld (26-3) only led by six at halftime, but outscored Shullsburg 37-13 in second half to run away with the championship.

Matthew Myers dropped 20 points for the Golden Eagles, while Malcolm Reed (12) and Mike Zouski (11) each chipped in with double figures. 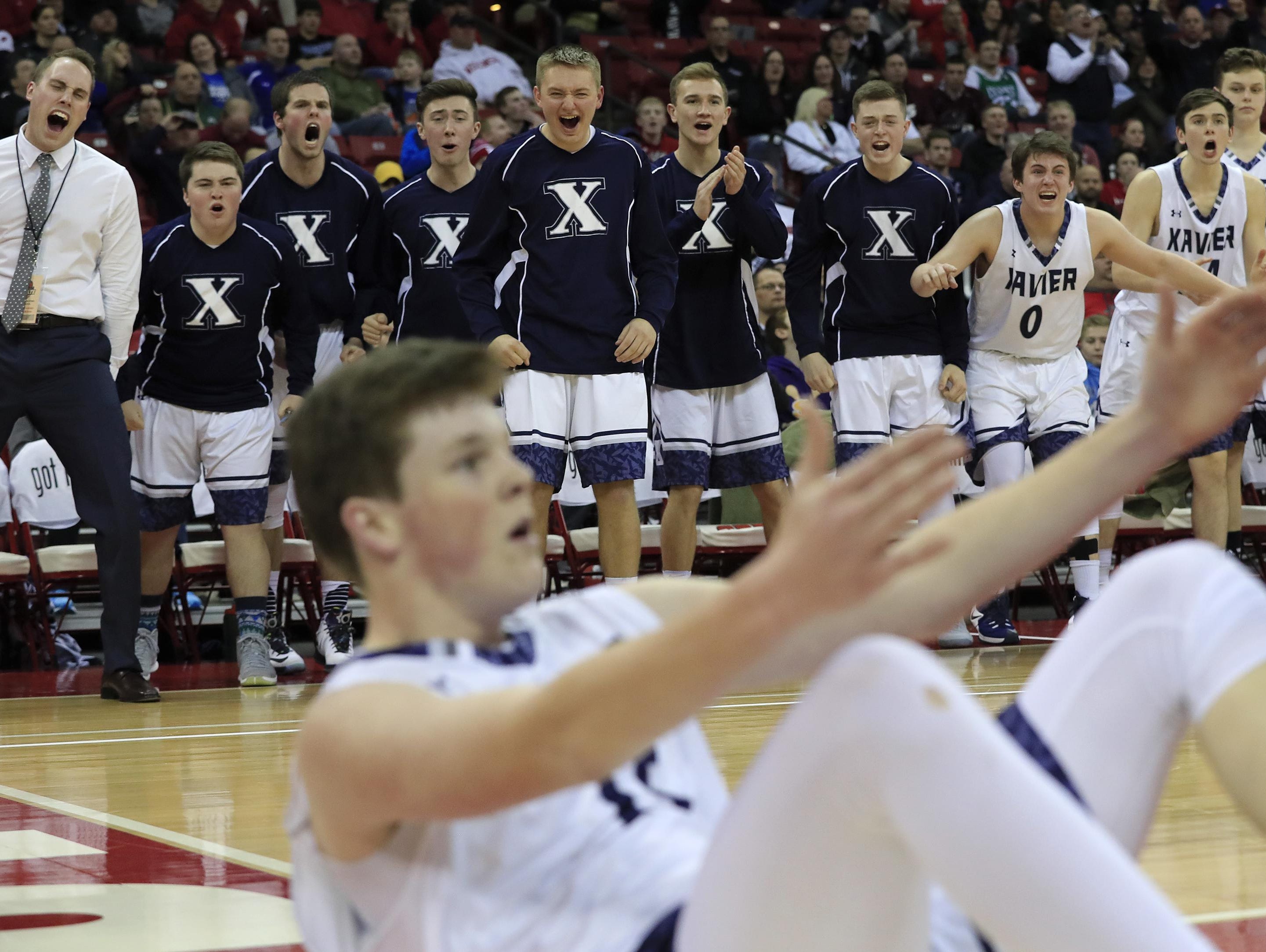 Xavier’s bench reacts after Nate DeYoung (15) drew a foul on Prescott’s Owen Hamilton (33) in the WIAA Division 3 championship game at the boys basketball state tournament at the Kohl Center on Saturday. Xavier won the game, 73-47.