Rookie running back Leonard Fournette will be in uniform when the Jacksonville Jaguars visit the Houston Texans on the opening Sunday of the NFL season.

It will be a moment 22-plus years in the making for the New Orleans native and football prodigy.

Only four years ago, Fournette was staking his claim as the No. 1 football recruit in America, a running back from New Orleans’ St. Augustine without parallel in Louisiana. Or anywhere else, for that matter.

As a junior in 2012, Fournette was named an American Family Insurance All-USA First-Team selection. All he did in his senior season was run for 1,792 yards and 16 touchdowns while adding 45 receptions for 745 yards and six scores. Add in his return yardage, and Fournette compiled 3,697 totals yards and 25 touchdowns.

For his efforts, Fournette was named 2013 All-USA Offensive Player of the Year.

From there, it was on to LSU, a college selection he made during the Under Armour All-American Game. Fournette chose to stay in-state and play for the Tigers over going to Alabama or Texas.

Once Fournette was in Baton Rouge, his celebrity reached new heights with each carry. The production from the punishing back matched the incoming hype.

As a freshman in 2014, Fournette played in all 13 games (starting six) and ran for 1,034 yards and 10 rushing TDs. That included an incredible performance in the Music City Bowl against Notre Dame where Fournette returned a kickoff 100 yards for a score in addition to carrying the ball 11 times for 143 yards and two touchdowns. LSU lost, 31-28, but the Tigers’ No. 7 had made his mark. 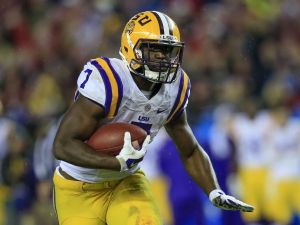 Leonard Fournette runs the ball while at LSU, where he finished his three-year collegiate career with 3,830 rushing yards and 40 rushing touchdowns..

He followed that up with the superb 2015 season, where he set school records with 1,953 yards and 22 rushing touchdowns. He finished sixth in the Heisman Trophy voting.

In 2016, Fournette missed five games with injuries but still managed 843 yards and eight TDs on 129 carries. In his sophomore and junior seasons, Fournette averaged 6.5 yards a carry.

Leonard Fournette poses with NFL commissioner Roger Goodell as he is selected as the No. 4 overall pick by the Jacksonville Jaguars in the first round of April’s NFL Draft at the Philadelphia Museum of Art. Photo: Bill Streicher/USA TODAY Sports

Fast forward to August, after Fournette had played his first NFL preseason game, a 31-24 victory at the home of the defending Super Bowl-champion New England Patriots. The former all-everything back was impressed with the step up in competition, but not that impressed.

“It’s a lot slower than I really thought,” Fournette told NFL.com. “That’s how I’ve been since I first got into the NFL. A lot of people were like, ‘It’s going to be fast.’ But by me playing in the SEC, that kind of helped me a lot. …I think, to me, it was really easy.”

The kid from New Orleans who became a phenom knows something else that is not at all easy – living through a devastating hurricane. Having been a 10-year-old during Hurricane Katrina in 2005, Fournette knows how awful a situation such a natural disaster can present. With that in mind, he recently pledged $50,000 to the Hurricane Harvey relief efforts in Houston.

Donating 50,000 to the people in Houston, y'all are in my prayers, we went through Katrina we know the feeling God bless…..

On Sunday, he will be in Houston, wearing the uniform of an NFL team. It is almost as if it was meant to happen.

My hood depending on me 🤚🏾✌🏿7️⃣ pic.twitter.com/q6jwzNm5Ws

https://usatodayhss.com/2017/tbt-2013-american-family-insurance-all-usa-opoy-leonard-fournette
#TBT: 2013 ALL-USA Offensive Player of the Year Leonard Fournette gets NFL career started Sunday
I found this story on USA TODAY High School Sports and wanted to share it with you: %link% For more high school stories, stats and videos, visit http://usatodayhss.com.