RICHLAND – Deandre Robinson and the East Lansing boys basketball team saw this as the year.

The No. 2-ranked Trojans viewed this as their chance to make the short trip to Breslin Center and realize their goals of winning a state title while taking care of some unfinished business from last year.

Instead, their journey had another tough ending.

East Lansing’s tournament run was halted with a 75-60 loss to No. 8-ranked Kalamazoo Central in a Class A regional final Wednesday night at Gull Lake High School.

The Trojans’ run ended in a regional final for the second straight year, who conclude the season at 24-1.

“It really hurts a lot,” said Robinson, who finished with a game-high 26 points. “We just came out here trying to do everything we could and it just wasn’t enough.”

Deandre Robinson ,right, of East Lansing gets a hand on the ball to force a turnover as Isaiah Livers ,center, of Kalamazoo Central attempts to pass out of a double team late in the 2nd quarter of their Class A Regional Final game Wednesday March 15, 2017 at Gull Lake High School in Richland.

Rog Stein had 19 points to lead four players in double figures for Kalamazoo Central (21-3) as it captured the regional title. He was also part of a strong defensive effort that made things difficult for Brandon Johns and East Lansing all night. Johns was held to seven points and didn’t hit a field goal until the final quarter.

“What Rog did tonight is what he does every night for us for the last two years,” Kalamazoo Central coach Ramsey Nichols said. “It was no surprise that he was going to step up and accept the challenge of guarding Johns.”

“Just like Holt the other night, we haven’t seen pressure like that,” East Lansing coach Steve Finamore said. “They’ve got a nice 1-2-2 half-court trap. Half court they play great defense. We get lessons out of this. Toughness, aggressiveness – you’ve got to learn those kind of things. Hopefully our underclassmen (do). They’re a great group coming back.”

The key stretch came in the final stages of the first half and early in the third quarter. Robinson pulled East Lansing within four with a 3 during the final minute of the second quarter, but Central answered with a 3 by Stein in the closing seconds of the half.

Central then scored nine straight to start the second half. East Lansing got within nine late in the third quarter, but never any closer.

“I think they just played harder than us, honestly,” Robinson said. “We just didn’t come ready to play and play hard. We just had too many turnovers.”

Finamore said he will miss seniors like Robinson, Caleb Hoekstra and Westin Myles, who played a significant part in the Trojans going 47-2 the last two seasons and winning a pair of CAAC Blue titles.

“I’m going to miss those guys,” Finamore said. “They put a lot into the program. They took the next step for us. (Going) 47-2 in two years is not too shabby.

“(There’s) no excuses, no finger pointing. Everyone did their best and there’s got to be a winner and a loser. Just because you fail doesn’t mean you’re a failure. We’re going to look ahead to next season now.” 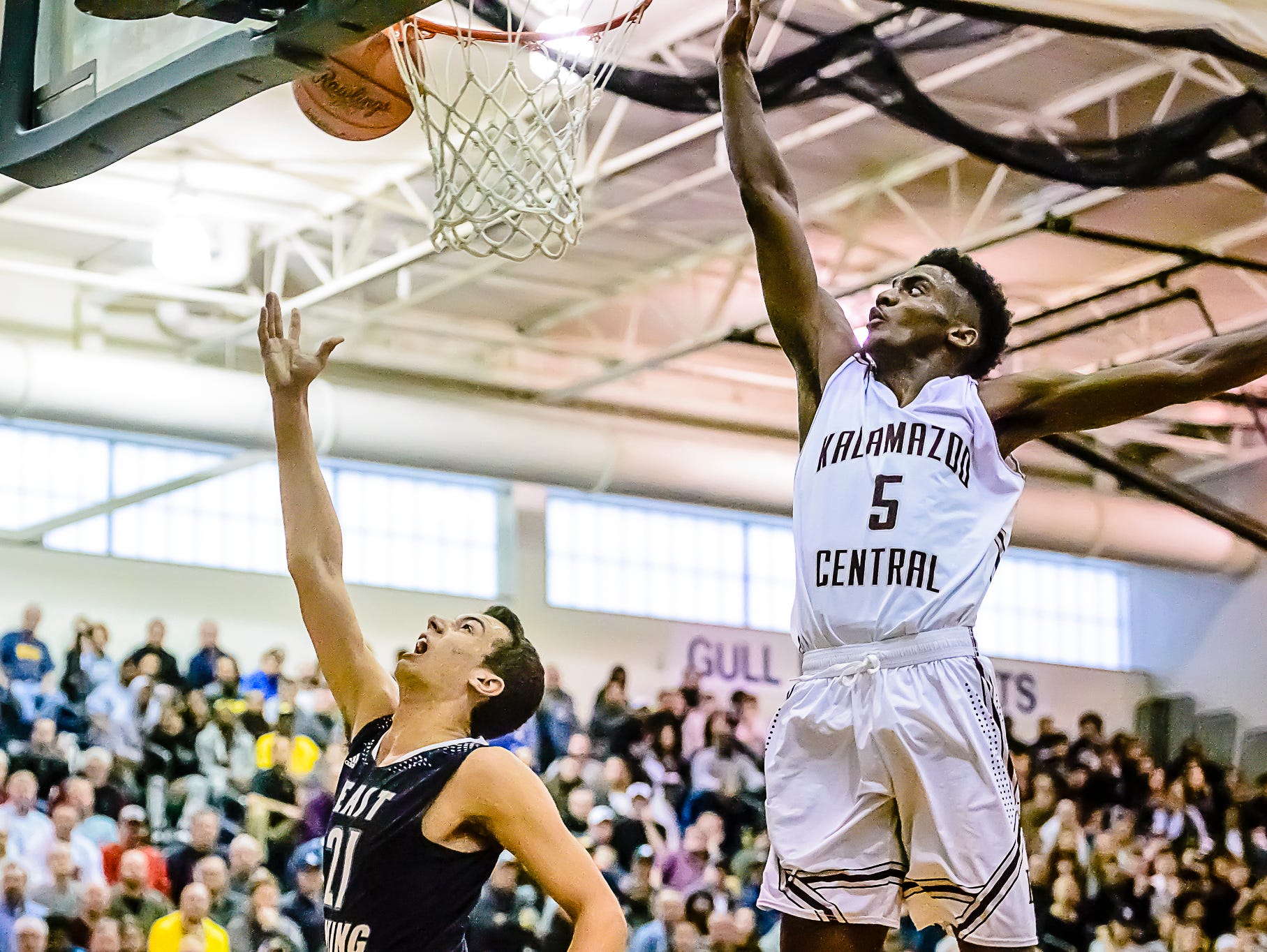 Westin Myles ,left, of East Lansing clangs the ball off the rim as he attempts a layup while being defended by Ontarion Burnett ,5, of Kalamazoo Central late in the 3rd quarter of their Class A Regional Final game with Kalamazoo Central leading 47-34 Wednesday March 15, 2017 at Gull Lake High School in Richland. KEVIN W. FOWLER PHOTO

Trojans upended by No. 8 Kalamazoo Central in Class A top-10 showdown