USA TODAY High School Sports has a weekly column on the college recruiting process. Here, you’ll find practical tips and real-world advice on becoming a better recruit to maximize your opportunities to play at the college level. Garland Cooper, was a three-time NFCA All-American (two-time first team) and Big Ten Player of the Year at Northwestern University. In 2012, Garland was inducted into the NU Hall of Fame having helped the Wildcats to a pair of Women’s College World Series appearances. She was also a first-round pick of the New England Riptide in the 2007 National Pro Fast Pitch College Draft. Garland is just one of many former college and professional players, college coaches, and parents who are part of the Next College Student Athlete team. Their knowledge, experience, and dedication along with NCSA’s history of digital innovation, and long-standing relationship with the college coaching community have made NCSA the largest and most successful athletic recruiting network in the country.

Last month University of Texas Football coach Tom Herman gained some internet notoriety for the colorful hydration charts posted in the locker room. The charts made the rounds in social media and helped bring attention to a critical part of every athlete’s daily regimen–proper hydration.

Water is a major player when it comes to keeping high school athletes healthy, energized, and at the top of their game when competing and in the classroom. Without the right amount of hydration, athletes will be fending off fatigue, dizziness, headaches, muscle cramps, and more. And when it’s not helping deter these common ailments, water is also keeping your body temperature in line, assisting brain function, and providing much-needed lubrication to joints.

Despite all the benefits, drinking water, like flossing, just doesn’t happen as much as should.

In fact, one recent study showed nearly a quarter of children from the ages of 6-19 were not drinking any water at all as part of their daily routine.

With college recruiting, so dependent on athletic and academic performance, it’s important to make sure your student-athlete has everything they need to excel-including something as basic as the right amount of water.

To land on the bright side of the hydration chart here are a few tips for making sure your student-athlete is getting the right amount of water every day.

There are many good reasons your student-athlete should start every morning with a glass of water. First, they haven’t been hydrating for the last 6-8 hours so now is the perfect time to replenish. Drinking water when they first wake up also helps kick start their metabolism, and make them feel less fatigued and sluggish and more alert. A good start to each day begins with at least eight ounces of water.

Keep up the pace during the day

Drink regularly throughout all physical activities. An athlete cannot always rely on his or her sense of thirst to sufficiently maintain proper hydration.

Keep in mind that water needs will vary by athlete, sport, and even the weather. One of the simplest way to make sure your athlete is getting enough water, in all seriousness, is to use the Longhorns Hydration Chart or a similar scale. Clear or light-colored urine and they are doing well. Anything below means there’s room for improvement.

You can also hydrate while you eat

Proper hydration doesn’t have to mean being a slave to the water bottle. There many healthy fruits and vegetables that can help supplement you water intake. Cucumbers, lettuce and celery are just a few high-water percentage vegetables and high water fruits include blueberries, watermelon, and oranges.

What to drink when water is scarce

In a perfect world, fresh water would always be available but the reality is there are many times when it’s just not easy or convenient. While not the first choice, sodas and fruit juices are better than nothing when water is not an option. For many years, caffeinated drinks were often thought to work against you by helping to promote dehydration, however, recent studies show this is not the case. That said, your athlete should not make these often-sugary drinks a frequent or consistent part of their daily liquid intake.

So how much water is enough?

The NCAA, in a post on proper hydration, rightly points out that there is no one size fits all recommendation to ensure an athlete is hydrated. The post does reference the general recommended daily fluid intake which is approximately 91 ounces for female adults and 125 ounces for males. The thing to remember is physically active athletes will obviously need to increase their water intake. The NCAA goes on to suggest developing a hydration plan based on the individual athlete.

And as Coach Herman reminded us all, the best place to start is to look at the chart. 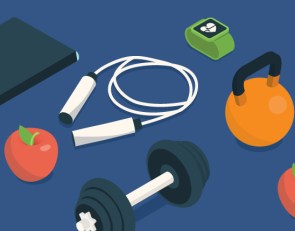 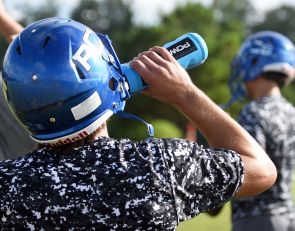 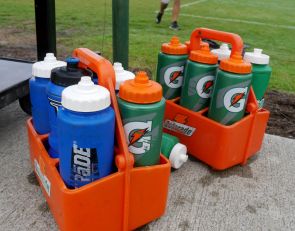 Reducing Risk in Sports: The importance of hydration

https://usatodayhss.com/2017/true-colors-using-the-texas-longhorns-chart-and-other-hydration-tips
True Colors: Using the Texas Longhorns chart and other hydration tips
I found this story on USA TODAY High School Sports and wanted to share it with you: %link% For more high school stories, stats and videos, visit http://usatodayhss.com.