Silverton’s Kaden Kuenzi ducks under the arms of Oleh Haider from Ukraine in a match at Sprague High School on Tuesday, March 8, 2017. Kuenzi was the only Salem all-star athlete to win their match against the Ukrainian team; he said his previous experience with freestyle wrestling helped him in the match up.

Andrii Dzhelep can check at least two items off his bucket list.

A member of the Ukrainian Junior National Wrestling Team which is touring Oregon this week, Dzhelep had never been to the United States before, nor had he seen the ocean up close and personal.

His previous exposure to America was limited to the movies.

“I wanted to see it with my eyes, not with the movie eyes,” Dzhelep said through an interpreter. “The waves were just amazing.”

None of the Ukrainians had experienced the ocean before and three of them scoffed at the cool temperatures and went in in their “skivvies,” Nazarii Skoropaniuk said.

Dzhelep, a 2016 cadet world champion (17 and under) at 119 pounds, and his teammates participated in the “Friendship Duals” on Tuesday night at Sprague High School, competing against the Salem Area All-Stars. The Ukrainians dominated most of the 13 freestyle matches, which was to be expected by a group of wrestlers who could represent their country in future Olympic Games.

The cultural exchange meet arranged by Rob Bronson, a former Sprague assistant wrestling coach who is co-director of Athletes In Action Wrestling, was about more than stepping into the wrestling circle. It reinforced a universal bond among wrestlers.

“It’s really cool just talking to these kids and getting to know ‘em. What’s it like where they’re from?” said Sprague sophomore Daniel McClung, who placed second in the recent OSAA Class 6A state championships at 126 pounds. “The sport brings everyone in the world together.”

McClung lost his match against Dzhelep, but noted that “it’s a really cool thing to say you wrestled a world champion.”

The Ukrainian team had their Pacific Ocean experience in Lincoln City, trained in the Oregon State wrestling room in Corvallis, visited the Oregon State Capitol, and put on a show at Sprague.

They’ll return to Salem next week — they have been staying with host families — after competing Sunday against the Roseburg Area All-Stars. A trip to Wildlife Safari in Winston is on the itinerary for the Roseburg trip, and a visit to the Nike World Headquarters in Beaverton is on tap for Tuesday.

Ukranian Junior National coach Oleg Zaiats said the trip to Oregon has been “a great experience” and marveled at the scenery.

“We like living with the American families. They have been very hospitable to us,” said Skoropaniuk, who placed third in last year’s Ukraine Nationals (163 pounds) in the senior division. “They’re always asking us if we’re doing OK and if they can help.”

Members of both teams exchanged gifts before the “Friendship Duals” and the camaraderie continued after the matches.

Yevhenii Dubovyi, who defeated North Salem sophomore Ian Carlos, the 6A state champion at 145, showed him some freestyle moves.

“A lot of blood, sweat and tears with the sport. It’s just an instant connection when you meet another wrestler,” Carlos said. “I see all the wrestlers as the same.”

A language barrier made political and philosophical discussions difficult, but the wrestlers connected.

“They look at these (Ukrainian) guys now and it’s like, ‘Oh my gosh, that’s Andrii’s country,’” Bronson said. “They’re all friends on Instagram and Facebook now.”

Freestyle wrestling, which is the style used in international competition, differs from the collegiate wrestling style at the high school and college levels in the United States. That put the Salem-Area All-Stars at a disadvantage and explains why most of the matches were one-sided.

Salem Area All-Star wrestlers cheer as Silverton’s Kaden Kuenzi wins a match against Oleh Haider from Ukraine at Sprague High School on Tuesday, March 8, 2017. Kuenzi was the only Salem all-star athlete to win their match against the Ukrainian team; he said his previous experience with freestyle wrestling helped him in the match up.

Silverton freshman Kaden Kuenzi was the exception. He posted a 10-0 victory over Oleh Haider at 101 pounds.

Kuenzi, the 5A state champion at 106, said he has a freestyle background and that helped in his match.

“I went out there, got on my attacks and finished ‘em,” Kuenzi said, adding that having the Ukrainians in Salem was “awesome.”

“They were polite and respectful. It was fun having them around.”

Most of the Ukrainians spoke little or no English, but they asked to attend classes at Sprague and enjoyed the experience.

Sprague wrestling coach Nolan Harris and his family are housing two of the Ukrainian wrestlers.

“When they leave during the day I was telling my wife, ‘I miss the Ukrainian wrestlers,’” Harris said. “You get a feel for what wrestling is like, training is like for them, school life, home life. It’s been fun.”

Sprague’s Michael Murphy is taken down by Ukraine’s Ivan Marusyk, left, in a match at Sprague High School on Tuesday, March 8, 2017. Members of the Ukrainian Junior National Team are touring Oregon, and stopped in Salem to compete against area high school all-stars.

Ukraine’s Andrii Dzhelep tries to pin Sprague’s Daniel McClung in a match at Sprague High School on Tuesday, March 8, 2017. McClung was the Oregon state runner up in the 126 pound division in 2017; Dzhelep is a 2016 cadet world champion in the 17 and under division.

Oleh Haider from Ukraine stretches before the start of a friendly meet with Salem area All-Stars at Sprague High School on Tuesday, March 8, 2017. Haider is a member of the Ukrainian Junior National Wrestling Team, which faced Salem wrestlers in a freestyle wrestling match. 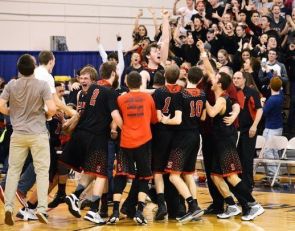 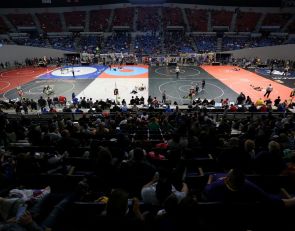 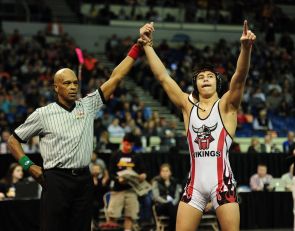 https://usatodayhss.com/2017/ukrainian-salem-wrestlers-unite-for-friendship-duals
Ukrainian, Salem wrestlers unite for 'Friendship Duals'
I found this story on USA TODAY High School Sports and wanted to share it with you: %link% For more high school stories, stats and videos, visit http://usatodayhss.com.