A Syracuse-area girls basketball coach believes his family was the victim of a racist hate act, though his relationship with friends of the alleged perpetrators of the act have raised at least some questions about motivation.

As reported by the Syracuse Post-Standard, Nottingham junior varsity girls basketball coach Jeffrey Richardson and his family, who are African-American, were faced with an armed perpetrator who aimed a gun at the family’s front door before firing a shot down the street. That act followed the display of a large sign that said “Get Out” on the Richardson’s lawn.

Richardson wrote extensively about the incident on his personal Facebook pabe, as you can see below:

The entire episode allegedly followed a dispute between the Richardsons and their landlord over rent, which played out over the telephone. Shortly after that phone call, a white man name Eric Simmons and his 14-year-old son installed the aforementioned “Get Out” sign on the lawn and then pointed a gun at the home’s front door before firing a single shot down the street.

Illegal handguns seized from man who put 'Get Out' sign at coach's house, police say https://t.co/FANQN9ZgTa

Simmons is listed as a 50-year-old Owasco, N.Y. man who has since been charged with fourth-degree criminal possession of a weapon, second-degree menacing, second-degree obstructing government administration and endangering the welfare of a child. Since his initial arrest, police have allegedly seized multiple illegal firearms from Simmons.

Despite the charges against Simmons, there are currently no hate crime-related charges pending against the man. That’s not okay with Richardson, who called the actions against him a “hatred act of racism,” according to the Post-Standard. 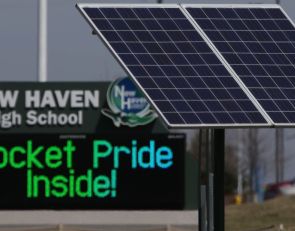 Mich. HS girls basketball coach arrested for sexually assaulting one of his female players outside hotel