Facing off against Las Vegas Coronado, Green Valley found itself in a situation to attempt a two-point conversion to stretch its lead against the Cougars. Rather than play it straight, Coronado sent wide receiver J-Vonni Sanchez in motion. After he crossed in front of quarterback A.J. Barilla, Sanchez began a routine that belongs in a gymnastics floor event. First he flopped through three cartwheels, then landed a perfect backflip as the ball was snapped.

You can see the play unfold at the 0:52 mark of the video above, or in the Tweet below.

The point was never to send the ball to Sanchez, of course. By the time the ball was snapped Sanchez had already done his job; he was the distraction, the eye-candy to keep anyone from noticing where Barilla really wanted to send the ball.

That was wide receiver Braxton Harms, who brought in Barilla’s pass through a remarkably tight window to convert the two-point conversion during Green Valley’s 24-7 victory.

The real question is whether Green Valley really needed to pull out such a unique play before arriving in the playoffs. At 7-1, the Gators are on quite a run.

Then again, given how seamlessly their first distraction play went, who knows, maybe there’s plenty more. 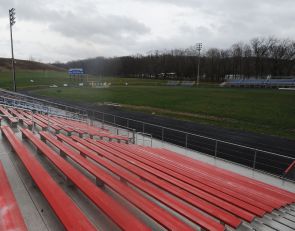 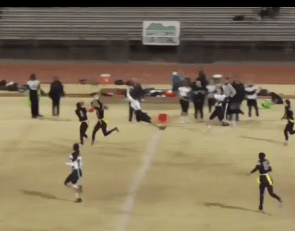 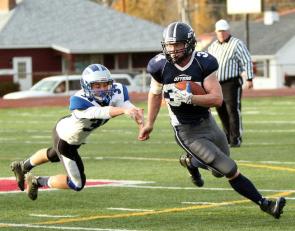 Leary, Otter Valley run past U-32 for D-III title