Ladies and gentlemen, we bring you Caleb Daniels.

A senior at St. Augustine High in Louisiana, Daniels is the standout star of a solid program. He’s also easily the team’s most athletic star, if not the state’s most athletic. He showed that in a recent game at the holiday Sunkist Tournament, where he threw down one of the dunks of the still young season.

That’s Daniels soaring above, well, just about everyone as he cruises into the lane and throws down an absolutely monstrous jam. The dunk was only worth two points, but it sure felt a lot more impactful than that.

Daniels is a versatile prospect who has lined up as a point guard and swingman. He’s a handful to deal with for anyone, which makes it a bit surprising that he hasn’t been recruited more heavily than he apparently has.

Perhaps that will change at the final hurdle, with months of his senior season and year ahead of him. With dunks like the one above, he certainly has the athleticism to compete, and perhaps even excel, at the next level. 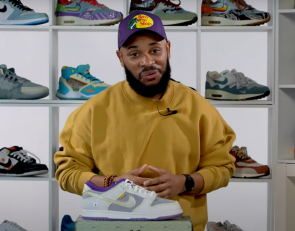 https://usatodayhss.com/2017/video-this-thunder-dunk-by-st-augustine-la-star-caleb-daniels-was-completely-unreal
VIDEO: This thunder dunk by St. Augustine (La.) star Caleb Daniels was completely unreal
I found this story on USA TODAY High School Sports and wanted to share it with you: %link% For more high school stories, stats and videos, visit http://usatodayhss.com.