It started with a very early morning breakfast with the rest of the Kettle Moraine (Wales, Wis.) girls golf team. They ate at her favorite spot and she had her favorite item on the menu, the veggie omelet. The good vibes continued at the practice where the senior was hitting well on the range and putting well on the green.

The Missouri State recruit had been on a roll heading into the Classic 8 Conference meet Thursday at Broadlands, but even by her high standards what happened over the next five or six hours was insane.

Eight birdies. Two eagles. No bogeys. The 12-under 60 she is believed to be the lowest round ever by a girl in state history.

Though official records for all regular-season girls golf scores across the state aren’t kept, the only known lower scores are the 65 shot by Casey Danielson of Osceola at the 2012 state meet and Lindsey Solberg of Middleton in 2005.

What is certain is that the round is a Classic 8 record. She beat the course record by eight strokes.

“I knew I could probably shoot one of my lowest rounds ever,” she said, “but I think I exceed all the expectations I had for today.”

The Lasers star recently picked up a putting lesson from PGA Tour pro Steve Stricker, and it appears to have paid off.

The performance allowed Cavaiani to wrap up the Classic 8 player of the year honor and overshadowed a pretty good second-place effort by one of her playing partners, Arrowhead junior Emily Lauterbach. The defending Division I state champion finished with a 5-under 67.

“For a high school senior, she is incredibly mature and she handled the moment well,” Kettle Moraine coach John Sams said. “It was really a fun round of golf considering everyone in the group was playing really well. She really didn’t make any mistakes out there today.”

Cavaiani has been one of the area’s top golfers throughout her time at Kettle Moraine and even before Thursday she was finishing her senior year strong. Last week she won the Waukesha Country Invitational with a 2-under 70 at Wanaki and Saturday she fired a 1-under 70 to win the Parker Golf Invitational at Riverside golf course in Janesville.

In the Broadlands, the conference meet was held on a course with which Cavaiani was quite familiar and comfortable.

“I like open courses and there are no trees on this course, just fescue,” she said. “It’s pretty open and that fits my eye pretty well. And I like the way the greens are running. The course is short. It’s probably one of the shortest we play all year, so with my length I can really attack some of the holes.”

Cavaiani just missed a birdie on the first hole, but made up for it with an eagle on No. 2 (par 5, 415 yards). After she birdied the next hole, she was off to the races.

There were no problems on this day. She came in a 6-under 30 on the back nine.

Cavaiani would have had a 59 if she could have made a long chip shot on 18. Nonetheless a 60 puts her in very exclusive company.

“Just the coaches that were there, I don’t think any of them were aware of anything that is remotely close to that,” Sams said of the possibility that the road is a state record.. “So we’re pretty positive it is.” 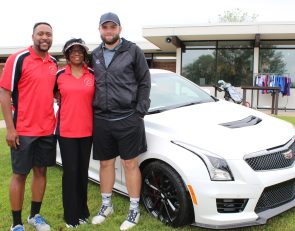