MADISON – Bay Conference champion Appleton Xavier advanced to the WIAA Division 3 title game with an 81-74 win over Ripon in a state semifinal at the Kohl Center on Thursday.

The Hawks (27-0) connected on nearly 60 precent of its field goal attempts for the game, including 64 percent in the first half. Their 81 points falls four points shy of the Division 3 scoring record.

Sam Ferris led the Hawks in scoring with 25 points, while Hunter Plamann poured in 22 points.

Eddie Muench led all scorers with 26 points for the Tigers. Bennett Vander Plas added 21 points to go with his game-high nine rebounds and six steals.

The Cardinals overcame an eight-point deficit in the second half, shooting 66 percent after the break to advance.

Petey Brookshaw added 14 points for the Cardinals (24-3). Luke Murphy dished out 11 assists, one shy of the Division 3 State Tournament record.

After allowing the first bucket of the game the Redbirds went on a 16-0 run and never looked back on their way to the WIAA Division 4 title game.

Ryan Glendenning chipped in 17 points for the Redbirds (27-0), while Will Schwarts added 14.

Before fouling out, Gunner Wilder scored 13 points for Cameron.

Romaine Robinson scored 15 first-half points off the bench and finished with 19 to help the Eagles knock off the Jets in the state semifinal matchup.

Sarion McGee did a little bit of everything for the Eagles (24-1) scoring nine points, grabbing 10 rebounds and dishing out eight assists.

Xavier’s Erin Powers (right) and others cheer for their teammates during a comeback run against Seymour in a Bay Conference girls’ basketball game Feb. 18 in Appleton.

Ripon’s Bennett Vander Plas (1) dunks over Xavier’s Nate DeYoung (15) in a WIAA Division 3 semifinal at the boys basketball state tournament at the Kohl Center on Thursday. 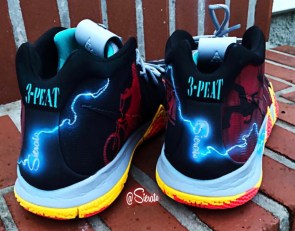 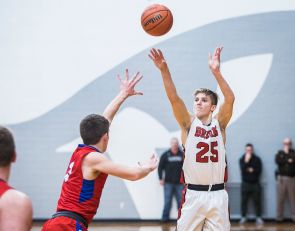 Everyone wants to shoot 3-pointers — and it's changing the game

https://usatodayhss.com/2017/xavier-advances-to-d3-title-game-2
Xavier advances to D3 title game
I found this story on USA TODAY High School Sports and wanted to share it with you: %link% For more high school stories, stats and videos, visit http://usatodayhss.com.