2021 recruit Patrick Baldwin Jr. has an edge in recruiting

2021 recruit Patrick Baldwin Jr. has an edge in recruiting

He’s already ahead in the recruiting game, thanks to his father, University of Wisconsin-Milwaukee coach Pat Baldwin Sr.

“He’s just saying to be completely honest with the coaches and accept that they want you sometimes,” Baldwin said. “Just take it one step at a time and don’t try to rush a decision too soon. Accept everything and consider everything and make the decision when the time comes.” 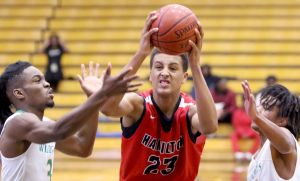 Baldwin may look at the situation a little differently because he’s been with his dad at several coaching stops. Before his father came to Milwaukee, he was the top assistant at Northwestern, but he’s been an assistant at Lincoln University, Wisconsin-Green Bay, Loyola, and Missouri State.

“I feel like I can get a great education at most schools that recruit me,” Baldwin said. “But I want coaching stability, so they are going to be there for the one, two, three or four years that I stay there and I want player development.”

He’s averaging 9.4 points and 3.0 rebounds through five games here. This past season, at Hamilton, he averaged 16.0 points, 5.4 rebounds and 2.7 assists per game.

“I try to be a versatile player,” he said. “What I’ve noticed here is I need to trust my lower body more. Sometimes I play a little high and get put off-balance.”

https://usatodayhss.com/2018/2021-recruit-patrick-baldwin-jr-has-an-edge-in-recruiting
2021 recruit Patrick Baldwin Jr. has an edge in recruiting
I found this story on USA TODAY High School Sports and wanted to share it with you: %link% For more high school stories, stats and videos, visit http://usatodayhss.com.