HOMESTEAD, Fla. – For a time, the pressure of expectation must’ve felt like an anvil on Brevin Balmeceda’s back.

That was far from the case.

Being around wrestlers has always been fun for Brevin – ever since he was a toddler, he got used to the entire South Dade team staying at his house on nights before big matches, sleeping on air mattresses, couches and spare beds in the Balmeceda home.

Brevin as a child with father, Vic. (Photo: Courtesy of Vic Balmeceda)

But while hanging out with the older boys was cool, the sport itself didn’t capture Brevin’s imagination at first, and understandably so.

It’s hard to fall in love with a sport when you’re getting beat, and it’s even worse when your father is a local legend and you are called “soft” by rivals, deemed unworthy to wear his crown.

That situation started to change in middle school.

The minute wrestling truly mattered to him, his father said, Brevin started winning, and he carried with him a mental “Kill Bill” list as he sought to exact revenge on the mat, punishing the kids who had defeated him, underestimated him and insulted him.

Now a 17-year-old junior, Brevin Balmeceda has numerous scholarship offers and has narrowed his choices to five universities, all of whom are ranked among the top 10 wrestling teams in the nation: No. 2 Ohio State; No. 3 Oklahoma State; No. 5 North Carolina State; No. 7 Iowa and No. 9 Virginia Tech.

A 5-7, 165-pounder, Balmeceda is ranked the No. 1 junior in the nation in the 152-pound class, cutting weight to help his team’s lineup. He’s a four-time national champion and a two-time state title-holder.

But that’s not all.

This past October, he traveled to Greensboro, N.C., and became the first wrestler in Miami-Dade County history to win the Super 32 national tournament. He beat six wrestlers by a combined score of 54-1, defeating Harvard-bound senior Joshua Kim 4-0 in the final.

Brevin won his first state title as an 8th-grader at Keys Gate Charter (Homestead), competing in the 106-pound class.

Before that season, Vic had no idea how his son would fare competing against older wrestlers … but he quickly got his answer.

“He beat kids with hairy legs and tattoos,” Vic said, “kids who were much more physically mature than he was at that time.”

As a freshman, Brevin transferred to South Dade so he could wrestle for his father.

Acceptance from his teammates was not immediate. He was making the transition from competing against small schools (Class 1A) to the largest in the state (3A), and he didn’t feel he proved himself until the latter part of that season.

Balmeceda nearly got his second state title that year but was denied in the semifinals by John Locksmith of Osceola (Kissimmee), a senior who went on to wrestle for Navy.

Undeterred, Balmeceda won state as a sophomore. He has posted a 243-16 career record, including 36-1 this season, and those types of numbers put a target squarely on the back of his singlet.

Last month, while competing at The Knockout Christmas Classic at Osceola, Balmeceda lost 3-2 in overtime to senior Justin Ruffin, a three-time state champion in Georgia.

“When I lose a match, I feel anger,” said Balmeceda, who has a 3.8 grade-point average and is interested in studying physical therapy in college.
“I go back and look at the video and see what position I was in, and I know I could’ve fought harder. I could’ve tried a little more.”

Brevin, who will try to lead South Dade to a state dual-meet title this weekend in Osceola and a team championship at Kissimmee’s Silver Spurs Arena on March 3, said he lives for certain types of rematches.

“I love facing kids who have beaten me or have given me a tough match,” he said. “It makes me better.”

That may be so, but his father was irked that even though his son was the home-state kid in the Osceola gym, there were a lot of people cheering for the Georgia wrestler (Ruffin) … or, more accurately, they were rooting against Brevin.

“Coaches, kids, fans – they want nothing more than to beat Brevin,” said Vic, 46, who has led South Dade to four straight state titles. “Because we’re beating all these teams, they want to see my son get beat to make me miserable.”

Brevin hasn’t let that bother him.

He has set high goals – becoming the best wrestler in South Dade history and also winning an NCAA national title – and he has the skills to get there, including, coaches say, the ability to ride or turn any wrestler in his age range.

“Brevin is an animal in the top position,” Osceola coach Jim Bird said.

Still, the pressure of expectations is always there.

“Brevin is cast as the villain,” Wimberley said. “He’s Darth Vader in Star Wars, even though (Brevin) is not a bad guy. He’s a great kid.

“It’s a no-win situation, but he’s learning to turn that into his advantage.” 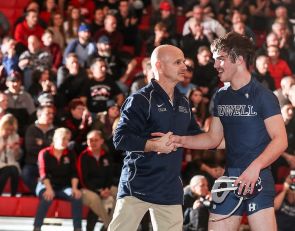 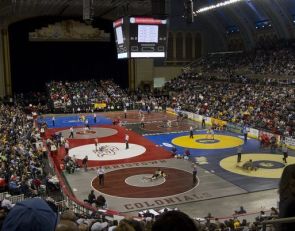 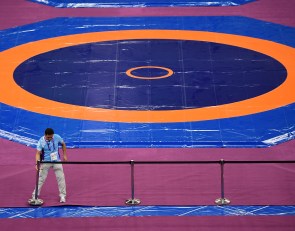 https://usatodayhss.com/2018/brevin-balmeceda-wrestling-south-dade
Son of legendary wrestling coach, Brevin Balmeceda cast as villain on mat
I found this story on USA TODAY High School Sports and wanted to share it with you: %link% For more high school stories, stats and videos, visit http://usatodayhss.com.