Coby White on late father: 'I know my dad is looking down on me'

Coby White on late father: 'I know my dad is looking down on me'

LEXINGTON, Va. – Bonita White sat in the front row of the bleachers Saturday afternoon at Rockbridge County High School, holding the game ball that moments earlier had been presented to her son, Coby.

It was a special, if not bittersweet, moment for the family. Coby White, a senior at Wilson, North Carolina’s Greenfield School, had just broken a nearly 14-year-old record for scoring. JamesOn Curry had previously held the record for most high school points scored in the state of North Carolina with 3,307 in his time at Eastern Alamance High School.

But with a 3-pointer late in the first half Saturday at the Rock the Ribbon Roundball Shootout, White took over the record. It was one of his three goals for this season. The other two were being selected to the McDonald’s All-American Game, which he was; and winning a state championship, something he and his Knights teammates are still working toward.

Also on Saturday, with his game-high 41 points, White claimed the Rock the Ribbon record for most points by a player in a single game. He beat out Rockbridge’s Ty Bennett, who scored 36 just a year ago.

When White hit the 3 to break the state record, the game was briefly stopped to honor him. Being able to give the game ball to his mom was something White will always remember, but it was also a difficult moment because there was someone missing — his dad. 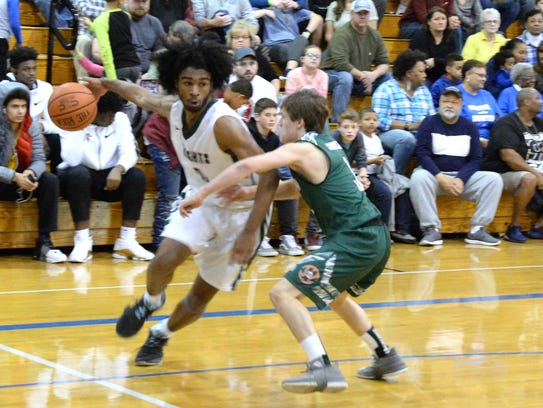 Standing outside his team’s locker room Friday night following the first of two Greenfield games this past weekend in Lexington, Coby White was wishing his dad could be there with him.

“It’s hard,” he said. “I just stay up late at night thinking about it. He had his vision for me too and him not being here is really hard for me and my family.”

White has lost other family members to cancer, but losing his father was especially hard. Getting a chance to play in the Rock the Ribbon, an event created to raise money for cancer awareness and research, meant a lot to White. He’s hoping the money raised can perhaps keep others from going through the same pain he and his family have suffered.

After the death of his father, USA Today asked White to keep a blog during his senior season, chronicling his life, both on the court and off.

White admitted he wasn’t big on writing before he was approached by USA Today, but he’s seen those skills improve during his time doing the blog. He has his own editing team, otherwise known as his mom and his sister, who read everything before he submits it.

“They look over it, make sure my grammar and everything is cool,” he said. “But it’s fun, just telling people about my life and what’s been going on.”

White still has some of what should be the biggest moments in his life ahead of him. North Carolina fans are eagerly anticipating his arrival in Chapel Hill, hoping he and the other newcomers next year — ESPN has the Carolina recruiting class for 2018 ranked as the fifth best in the nation — can bring more national championships to the Tar Heel program.

Whatever happens in the future, White knows it won’t be easy without his dad, but that also motivates him to make the most out of all of his opportunities.

“You’ve just got to live on,” White said. “Before every game I pray and I talk to God every night before I go to sleep. Devoting my life to God has been a big part of it. He’s helped me a lot. It’s always going to be hard. It’s nothing you can ever get over. It’s always going to be in the back of my mind, but I know my dad is looking down on me. I know he’s with me all the time, everywhere I go. He’s with me in spirit.”

https://usatodayhss.com/2018/coby-white-on-late-father-i-know-my-dad-is-looking-down-on-me
Coby White on late father: 'I know my dad is looking down on me'
I found this story on USA TODAY High School Sports and wanted to share it with you: %link% For more high school stories, stats and videos, visit http://usatodayhss.com.