Duke checks in at No. 3 in the latest USA Today/Coaches Poll, but most experts and analysts agree that the road to the national title runs through Durham, N.C.

That standard isn’t likely to change next season with University School (Fort Lauderdale, Fla.) forward Vernon Carey Jr. suiting up for the Blue Devils. The five-star forward made the announcement in a Thursday afternoon press conference at the school, televised live on ESPN’s SportsCenter.

Carey, who is ranked No. 3 overall in USA Today Sports’ Chosen 25 for 2019, picked Duke over Michigan State and North Carolina.

“The reason why I chose Duke and Coach K is the recruiting class they’re bringing in this year,” Carey told ESPN’s Cari Champion. “Wendell Moore and Boogie Ellis, and hopefully some more guys will come with me.”

In Carey, Duke gets one of the biggest matchup problems in the country because of his versatility.

At 6-foot-10, Carey is a capable ball handler with the ability to create for his teammates, take his man off the dribble from the wing, knock down the perimeter jump shot and overpower and out-maneuver the opposition in the paint.

“They see me as a position-less player,” Carey told ESPN’s Seth Greenberg. “They said I can be anywhere on the court, so that worked well with me.”

In October, Carey told USA Today Sports that he welcomed the idea of playing alongside another dominant big man; that should help immensely in Duke’s pursuit of La Lumiere School (La Porte, Ind.) forward Isaiah Stewart, who is ranked No. 4 overall in the Chosen 25.

Last season, Carey averaged 26 points and 10.4 rebounds a game in route to leading the Sharks to a state title and the GEICO High School Nationals championship game. 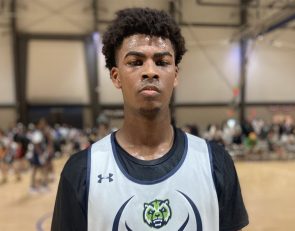