Doyel: A story of greatness and sacrifice — and how they're intertwined

Doyel: A story of greatness and sacrifice — and how they're intertwined

NEW PALESTINE, Ind. – New Palestine junior Charlie Spegal scores on his first carry Friday night, spinning 360 degrees out of a tackle and sprinting 43 yards for a touchdown. On the sideline, Luke Canfield is watching. He is cheering.

Spegal doesn’t score on his second carry, but does on his third, a 1-yard plunge. He scores on his fifth carry as well, a 33-yard sprint. On the sideline, Luke Canfield is watching. He is cheering.

On his fourth touchdown of the first quarter, Spegal is met in the hole by a Greenfield-Central defender. Spegal lowers his head and runs him over. On his sixth touchdown, a 14-yarder late in the second quarter, Spegal explodes through another big hole created by the New Pal offensive line. A Greenfield-Central defender latches onto the back of his jersey, but Spegal pulls him the final 10 yards into the end zone, like a boat would pull a water skier.

On the sideline? Canfield is watching. Cheering.

One half of this 76-7 blowout by No. 1 New Pal is all Spegal will play, 15 carries are all he will get, but he produces 195 yards and six touchdowns as the Dragons open a 69-0 lead by halftime.

What happened here Friday night, what has been happening all season at New Pal, is a story of greatness and sacrifice, and how they can be intertwined.

And how, sometimes, they can be the same thing. 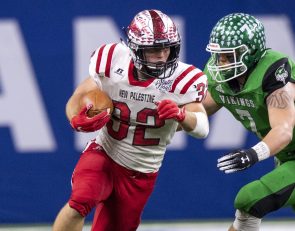 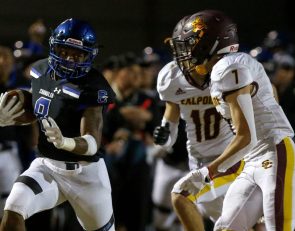 https://usatodayhss.com/2018/doyel-a-story-of-greatness-and-sacrifice-and-how-theyre-intertwined
Doyel: A story of greatness and sacrifice — and how they're intertwined
I found this story on USA TODAY High School Sports and wanted to share it with you: %link% For more high school stories, stats and videos, visit http://usatodayhss.com.