The kid they call “Stick,” a 6-foot-6, 16-year-old, slowly walks up steps at his Litchfield Park home with help from his dad.

It is Dylan Miller’s second day back from the hospital and pictures, mostly courtesy of his photographer mom Natalie, decorate the walls.

Wearing a white protective shield over his head, the high school junior takes a seat in front of a long banner with notes of encouragement from what seems like the entire Buckeye Verrado student population. In the middle, in large letters is Ra11y, the yellow number in the middle, his jersey number, retired by football coach Tom Ward since that Dec. 6 freak day.

Football team rallying around teammate fighting for his life: 'He’s strong and a fighter'

Miller had just finished a workout in the weight room. A junior wide receiver in football and hurdler in track, he was growing and developing into what Ward figured would be the centerpiece to next year’s team.

He pulled out of the Verrado High parking lot with two teammates in his 1996 Toyota 4Runner. 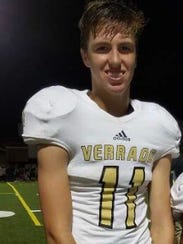 With nobody strapped in, the truck found the curb just right as Miller accelerated out of the gravel, as his dad described, and it got sideways. It rolled onto the passenger’s side over the hood and came back to rest on the driver’s side, Miller’s head stuck out just enough to do damage.

The truck came to rest in a puddle hole. Had it been flat ground, the impact would have killed him.

“That was the miracle part of him being able to survive it,” said Deron Miller, Dylan’s dad.

His teammates crawled out on their own. Within 15 minutes, Miller was moved to a hospital, where he underwent surgery for bilateral subdural bleeding. A craniectomy was performed, removing a piece of the left bone flap of his skull because of the swelling.

After 13 days in a coma, the first three medically induced, Miller awoke in a new hospital,  Barrow Neurological Institute, at first opening an eye, moving a finger, wiggling a toe. With much prayer and support on social media coming all the way from England and France, Miller’s family is awed by how far he has come.

When Miller came home Wednesday, he was asked what he wanted for his first meal. His answer: Crab legs, filet mignon, corn on the cob and a baked potato.

“He put it down like a champ,” Deron said.

Football ends but life goes on

On Monday, he’ll return to Abrazo West Campus, a Level 1 trauma center, where the bone flap that has been placed in a freezer since the first surgery will be placed back in.

With the bone flap out, he suffered from what his father called “sunken-head syndrome,” which caused the brain to move, impacting his speed of thought and ability to speak.

When the bone flap is put back in, Miller was told he could have up to a 50 percent increase in cognitive thoughts and balance within 48 hours.

“He’s done so well without the bone flap,” Deron said. “To think he can get that much better in two days is amazing.”

Football is over. It’s uncertain whether he will run track again. But Miller could soon be fitted for golf clubs and taking lessons.

“The thing that hurts me most for him, he could have gone to college and played football,” Deron said. “But everything he wants to be in his grown life, a nurse, a physician’s assistant, getting on the fire department, he’s a dual-career guy. He can get to those places academically. He has a 4.8 GPA. He’s really smart.”

He lost 50 pounds since the accident, but has regained nine pounds since given a non-restrictive diet and is up to 163 pounds.

Miller doesn’t say much. His words are slow and difficult to come out.

After that, it’s blank.

Miller is following the Barrow’s textbook on the steps to recovering from traumatic brain injury. He has been recommended for a center for transition neuro-rehab that could last anywhere from several weeks to a year.

There, he will work on basic things such as living on his own, boiling water without hurting himself, doing dishes, taking a shower. Simultaneously, his dad said, he’ll be working on getting back to school.

“He could be back in school by mid-March, best-case scenario,” Deron said.

Meanwhile, Miller is entertained at home by his 2-year-old brother Knoxx, who makes him smile.

The outpouring of support, not just from the Buckeye Verrado community, but worldwide, his mom says is “amazing.”

“It’s miraculous,” Natalie said. “On social media, people from all over the world, are doing fundraisers. It’s amazing to see.”

Local support has been huge.

“In the beginning, people were with me every day and night at the hospital,” Deron said. “We were close to Christmas break. Boys on the football team came out and hung out with me. That was therapeutic for me. I had some real cool conversations with some young men I hadn’t really known. Now I consider them my sons.”

No doctor will sign off on him playing football gain. But Miller plans to be out there next football season in some capacity. Whether it is as a manger or a co-captain, he is good. He is grateful to be alive.