Williams, a Louisiana State signee and power forward from Oak Ridge (Orlando), scored a Jordan Brand-record 44 points, mostly off a variety of heinously nasty dunks, to lead the Home squad to a 146-136 win Sunday in the 17th annual Jordan Brand Classic boys basketball game at the Barclays Center in Brooklyn.

“The biggest thing I bring to the table is my motor and guys love that,” Williams said. “As you can see, I told the players, ‘We’re all going to eat.’ I had 44 points, but guys were passing me the ball. It’s not like I was just taking a lot of shots. I’m glad people are noticing me now. I wasn’t a McDonald’s All-American, and I know I should have been one and I made a statement why I should have been one. I may take tomorrow off, but Tuesday, I’ll be back in the gym.” 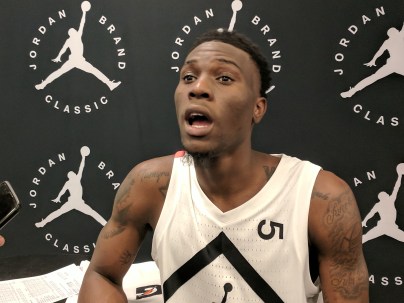 Findlay Prep (Henderson, Nev.) center Bol Bol, an Oregon signee, also had 22 points and nine rebounds for the Away team.

Cole Swider, the lone Villanova signee in the game, also had a solid game for the Home squad. The power forward from St. Andrew’s School (Providence, R.I.) had 17 points.

“I didn’t shoot the ball as well as I wanted to, but I scored the ball pretty well for the amount of minutes (16) that I played,” Swider said. “I’m sure (Villanova coach Jay Wright) has already texted me. I ready to get there and get everything started. I just want to play Villanova basketball and play to the best of my ability.”

First Reddish nailed a long trey over Little late in the game to bring the house down. The next time down the floor, Little returned the favor with a block. Then both squads cleared out and Reddish took Little for a layup off the dribble. A few trips later, Little scored over Reddish. The rivalry between Duke and North Carolina is always there. Reddish finished with 19 points.

“Naz and I went against each other a few times,” Reddish said. “It was a lot of fun. Of course the (Duke-North Carolina rivalry) is there, but at the end of the day, it’s basketball and you just have to compete.”

Gatorade Player of the Year 2m ago