Five things we learned at The Opening

Five things we learned at The Opening

Five things we learned this week at Nike’s The Opening football camp in Frisco, Texas:

Kyle Ford was in beast mode all week

Ford was hands down, the top receiver at the camp. It helped that his high school teammate at Orange Lutheran (Orange, Calif.), Ryan Hilinski, was often throwing to him, but he was always his team’s best option.

Time and again, his team would go to him on high throws to the back of the end zone, where Ford or no one else would catch it. At 6-2 and 209 pounds, he can play tight end, but he’s too quick and athletic to be anything but a wide receiver.

“I keep my speed up and I’m beating safeties and DBs all day by two steps, not like I’m barely beating them, so I don’t think I’ll have to switch like that,” he said.

Ford has a special connection with Hilinski but also came away impressed with Blue Valley North (Blue Valley, Kan.) quarterback Graham Mertz, his team’s other quarterback and a Wisconsin commit.

“(Hilinski) is my guy and he’s my quarterback from my team and you could tell we were connected, but Graham Mertz is a beast, Ford said. “He’s going to be great in college. Either way it went, we had great quarterbacks, so I was really fortunate.”

Ford said he doesn’t plan on committing until after the season and still has four official visits. His only official visit so far was to Colorado. He also plans to going to Oregon, Michigan, Ohio State and possibly Southern Cal, but another school could work its way into the mix.

In the meantime, he’s looking forward to OLU’s opener Aug. 10 at Downey.

“I’m really excited about the team we have going into the season,” Ford said. “I felt like I’ve been working really hard and I can take over a bit. We have a loaded lineup and I think we could shock some teams. People look at it as just Bosco and Mater Dei in the Trinity League, but we could come up this year.”

Rattler, Hilinski were the most impressive QBs

Rattler, who passed for 45 touchdowns and 3,946 yards last season at Pinnacle, showed a lot of confidence Tuesday. He also went the day without an interception.

Ryan Hilinski, a South Carolina commit from Orange Lutheran (Lutheran, Calif.), will also be highly ranked when the first Chosen 25 rankings come out. He did a great job of looking off defenders, something that will be crucial in college. He hardly played Tuesday, but on Monday, he completed 28 of 33 passes for seven touchdowns with no interceptions.

Jacob Bandes helped himself quite a bit

Bandes didn’t have the highest recruiting ranking coming into the event, but he left it as the defensive line MVP. The Pittsburg, Calif., player is 6-3 and 294 and used his quickness and good hand technique to consistently beat bigger offensive linemen.

The venue was a hit for most

This was the first year The Opening finals were held in Frisco, Texas, as it had been at Nike’s headquarters in Beaverton, Ore., in the past.

The site had several positives with the new site, which the Dallas Cowboys’ indoor practice facility and home for Frisco ISD high school football teams. The Dallas area is centrally located, so it was easier for recruits and their families to get to. The building was modern and there was plenty of parking and restaurants nearby. Most of the action was played indoors, but some of the games were held at an adjacent outdoor field and temperatures there often went into the triple digits, something not likely in Oregon. 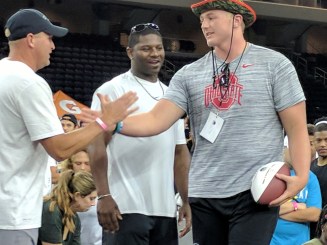 Whether he’s a guard or center, Harry Miller was dominant

Miller, an Ohio State commit from Buford, Ga., was named the top offensive lineman at the camp. The 6-4, 310-pound senior is listed as a guard or center, depending on the recruiting service. He won most of his reps and seemed to learn quickly as the camp went on. That shouldn’t be a surprise. An excellent student, he may be the only player here with a Latin quote on his Twitter page: Ignis aurum probat, miseria fortes viros which means fire tests gold, adversity brave men.

VIDEO: This wild catch by Bobo Stewart was ... somehow a catch?

https://usatodayhss.com/2018/five-things-we-learned-at-the-opening
Five things we learned at The Opening
I found this story on USA TODAY High School Sports and wanted to share it with you: %link% For more high school stories, stats and videos, visit http://usatodayhss.com.