He was two weeks premature and still weighed 10 pounds. He was stuck — literally too big to come out.

In the delivery room, things became alarming in a heartbeat. The doctor told Williams’ grandmother, Deb, to shut her camera and stop filming. Now. Then he told Williams’ mother, Kori, to push harder than she ever knew was possible.

“I wanted to smack him in the face,” Kori said, able to laugh about it now.

Eventually, after what felt like a life’s worth of labor, Gavin was born.

Kori recalls that bruises covered his body. His clavicle and two ribs were broken. She had to wrap him up tightly so his bones could heal properly and he wouldn’t suffer from any lifelong repercussions.

Sixteen years later, Williams is a 6-foot, 200-pound running back and one of the top football prospects in the Midwest. He holds scholarship offers from Iowa, Iowa State, Michigan and Nebraska, as well as interest from Notre Dame.

Williams certainly makes a difference for his football team. He amassed 1,537 rushing yards as a freshman and sophomore combined, and he’s a big reason why Southeast Polk opens the season ranked No. 10 in the Register’s preseason Super 10.

But Williams doesn’t want to be known as just a football player.

He’s felt that way since sixth grade when he first noticed kids wanted to be friends with him as he became more dominant in football.

“I will always remember him saying to me, ‘Mom, I just want people to like me for who I am, not what I can do on the football field,'” said Kori.

The thing is, for those outside his immediate family, it’s not always easy to get to know Williams. He isn’t talkative. He listens intently, but won’t say more than a few words unless he’s discussing movies or engineering. He hates when classmates ask where he’ll play in college.

He says he mumbles, “I don’t know,” and quickly walks away.

‘I put up these walls’

Kori Williams teaches fourth grade at McKinley Elementary in Des Moines. Many of her students are refugees from Sudan or Burma.

Gavin has become a role model to her classes.

“I use him as an example for the kids to have somebody to look up to — that they know they can do the same types of things,” Kori said, sitting at her classroom desk with a photo of Gavin pinned on the blackboard to her left.

“It doesn’t have to be football. It can be in life, just being a good person.”

Kori said Gavin received the local celebrity treatment when he visited her class last year. He played with her students on the playground and raced anyone up for the challenge.

Gavin thrives as a role model, Kori said. It’s one of the situations in which he lets his guard down.

He also lets that guard down at home, where Kori said her son is a different person.

“He’s just a kid who likes to be at home with his family,” Kori said. “Kids will come to our house, he’ll invite them over. He’s not a kid that goes out and hangs out on the town.

“At home, it’s more of a safe place. He feels like he can tear down some walls and let it out.” 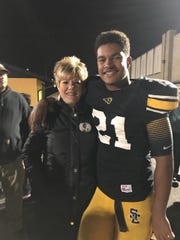 Part of Williams’ closed-off nature results from the mindset that began developing in sixth grade — that he thought people only liked him for football. He was leery of hangers-on then, and he’s still leery now.

Particularly because, even at age 16, Williams has much to lose.

“He’s in a position that not many normal high school kids are in,” Rams head coach Brad Zelenovich said.

He has scholarships to play the game he loves and receive a free education. Kori talks with Gavin about how all that could vanish in an instant if he isn’t smart or somebody takes advantage of him.

“There’s always going to be people who are always trying to get something from you,” Gavin said. “I put up these walls. I don’t let a lot of people in. That’s possibly a reason why I like to stay at home. The people that come to my house or are at my house, I can trust them and I know they’re not going to intentionally hurt me.”

Why is Williams comfortable bringing down his walls at home?

“Because my family is there.”

A family man and a film critic

Williams used to cry whenever he’d go through the McDonald’s drive-thru.

That’s where his grandfather, Ron, would take Gavin and his older sister, Whitney, to get ice cream. Ron was a constant presence at every one of Gavin’s significant life events despite the handicap that put him in a wheelchair.

Ron, Kori’s father, died in 2008 on Kori’s birthday. Gavin wishes he was alive today to see what he’s accomplished.

“I just miss him,” Gavin said Monday, sitting with his mom on a bench near Southeast Polk’s stadium. “Now and then, it gets a little rough.”

Williams is all about family. Whitney, 21, is a student at Minnesota State. He also has a 3-year-old brother, Brayden, who Gavin loves to take outside and play catch with. Rumor has it Brayden already has a cannon for an arm. 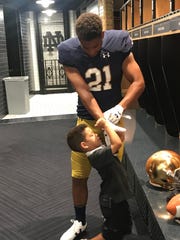 Williams is particularly close with his mother. He lives with her and Brayden. They often go out to eat dinner at Monterrey Mexican Restaurant and then catch a movie.

“We haven’t been in a while,” Kori admitted

“That’s because there aren’t a lot of good movies out,” Gavin said sitting by her. “I mean, ‘Megalodon’ was OK. But it was based off of ‘Jaws.’ I could have just watched ‘Jaws.'”

If football doesn’t work out, Williams acknowledged becoming a film critic might not be half bad.

‘Do I have a team of coaches that’s invested in my son?’

Williams will likely visit Notre Dame for its Sept. 1 season-opener against Michigan. Then he’s hoping to take game day visits to Iowa, Iowa State and Michigan during the season.

If he’s leaning toward any school, you’d never know. Williams would rather talk to you about the shortcomings of the “Mission Impossible” franchise than his recruitment.

He does say one thing about recruitment, though: He doesn’t want college coaches just showering him with praise.

“I still need (coaching) on how I can get better — things I need to work on,” Williams said.

With an offer sheet as impressive as Williams’ entering his junior season, chances are he will haul in a few more offers before making a decision.

Program prestige won’t matter. Kori said her son is all about relationships.

“What’s going to make or break where I think he commits is the type of relationship the university puts forth,” Kori said. “And not just with the running backs coach, but all of the coaches. Something that I look for when I go to the recruiting visits with him, I look for how many coaches introduce themselves and make a part of the day to get to know him and us. That’s going to be huge for him. I look at it as a mom thinking, ‘OK, is there just one coach that’s investing in my son? Or do I have a team of coaches that’s invested in my son?'”

Kori began noticing Gavin stood apart from his football peers in seventh grade, when they had to switch leagues because one deemed him too big to play running back. Then when Gavin piled up 805 yards on varsity as a freshman two years ago, she knew he had a chance to be special.

Boys Track and Field 22hr ago