One of the nation's top 8th-grade basketball stars is in Pennsylvania. But will he stay?

One of the nation's top 8th-grade basketball stars is in Pennsylvania. But will he stay?

The game in the cramped, old gym with wooden bleachers was nearly over.

Susquehannock’s eighth grade boys were hammering yet another overmatched basketball opponent, this time by nearly 50 points.

Some of the varsity players, three and four years older, were hanging on the side to watch, curious by the performance of one kid in particular.

“How many dunks does Jarace have? I think I saw three …”

Jarace Walker plays for an undefeated freshman team that regularly puts on a fast-paced show as entertaining as most nights around the YAIAA. They run and press, fire 3-pointers and throw alley-oop passes off the backboard for dunks.

At the center of it all is the 14-year-old kid wearing size 16 shoes. The one who’s 6-foot-4 and still growing.

Jarace is a Top 10 prospect nationally for his age group, according to websites that rank such things. He’s nearly a head taller than most everyone else on the court and can still handle the ball deftly and shoot 3-pointers with ease.

During that demolition of Dover this week he slung long bounce passes to fast-breaking teammates. He threw one pass between his legs to produce a layup, another behind his back to set up a baseline jump shot. 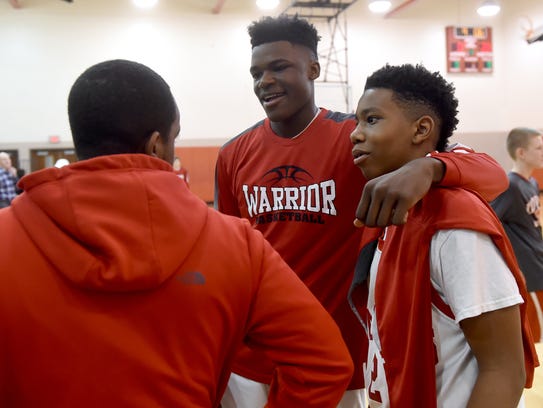 Jarace Walker, right, who stands several inches taller than most of his ninth grade teammates at Susquehannock, jokes around after of a game against Dover High School. Walker, an eighth grader at Southern Middle School, is a national Top 10 prospect for his age group (Photo: Jason Plotkin, York Daily Record)

The dunks? Jarace threw down three in the first quarter alone, one behind his head and another off a backboard pass from fast-twitch point guard Jalen Franklin, another eighth-grader with a starry future.

Basketball prodigies appear only now and again around places like York County — but nearly never with the potential to grow to 6-foot-9.

Certainly, he could lead Susquehannock into a basketball power, especially with the strongest supporting cast in years growing along with him. He could instantly overhaul a long-struggling program in similar fashion to Adam Miller at Kennard-Dale 25 years ago or Eli Brooks at Spring Grove the last few seasons.

For Jarace, the attention may be even more intense. He’s become such a hot recruiting commodity that he has exclusive high school options near and far — prep schools and academies promising elite basketball competition and coaching, as well as high-powered academics.

It’s a decision he and his parents have been researching and debating for more than a year.

One finally coming into focus as he seems to raise his stock by the week.

Will the rarest of talents leave the area before he ever plays a high school game?

Jarace’s combination of size, skill and possibility has become the buzz of the basketball world between York and Baltimore, where he plays on elite AAU and Premier Youth Basketball League travel teams all year.

He’s been courted relentlessly by private schools from Baltimore to Virginia that double as basketball powers. Many play in the Washington Catholic Athletic Conference, regarded as the toughest in America.

Marcia Walker talks with her son, Jarace, 14, about his schedule after a recent game at Susquehannock High School. Jarace, an eighth grader at Southern Middle School, stands 6-foot-4 and is already taller than his 5-foot-11 mother.  (Photo: Jason Plotkin, York Daily Record)

Jarace and his parents even flew to Florida this week to tour the elite IMG Academy in Bradenton, a national athletic and academic training ground.

“He certainly is one of the most talented players at that age that I’ve seen. I think the sky’s the limit for him …, ” said Pat Clatchey, who has coached Mount Saint Joseph’s storied high school basketball program in Baltimore for 25 years.

Colleges are reaching out already, too, recruiting letters coming from Arizona and Syracuse.

Meanwhile, Jarace plays AAU basketball for Team Thrill, one of the premier programs in the East. One of its player, sophomore Isaiah Todd, was named the No. 1 prospect in the Class of 2020 by ESPN.

Most everyone says Jarace is markedly better from a year ago. He’s not just bigger and stronger but plays much more confidently and at ease with his skills.

And yet, his “coachability and character stand out way beyond the skill,” said Donnell Dobbins, his AAU coach. “He accepts criticism and applies that to his game and wants to work hard.

“There’s a lot of skilled players around the country, but his intangibles and character is what set him above the other kids.”

Jarace says, rather matter-of-factly, that he plays the game seven days a week and never tires of it. The way he sees it, there’s a new challenge every day to improve.

“I think I make better decisions now, I have less turnovers and get my teammates more involved,” he said of his personal growth. “Just my mentality, how I view the game now is more aggressive, I play harder. I just take the game more seriously.” 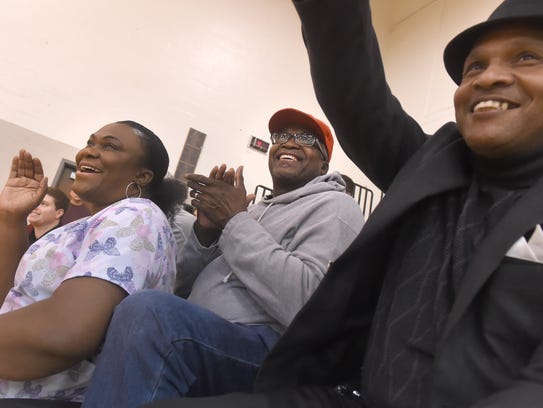 Marcia, left, and Horace Walker, center, cheer for their son, Jarace,14, during a recent game at Susquehannock High School. “Jarace would rather give those kids a layup than him having a layup,” said Horace of his son. “When he does that it elevates them and gives them confidence.” (Photo: Jason Plotkin, York Daily Record)

It seems that most everyone in the Southern York County School District knows of Jarace — and his decision at hand. Of course, he’s been implored by many to stay true to the community he’s been raised in since kindergarten. His parents moved their four children to a housing development just outside of New Freedom a dozen years ago after living in New York City and Maryland.

One older sister, Jaden, helped Susquehannock win its first district title in girls’ basketball last winter. She’s a junior and already has accepted a Division I scholarship to St. Joseph’s University in Philadelphia.

They will begin discussions toward that final decision after returning from their Florida recruiting trip. They say they are leaning toward Jarace leaving the area for high school. 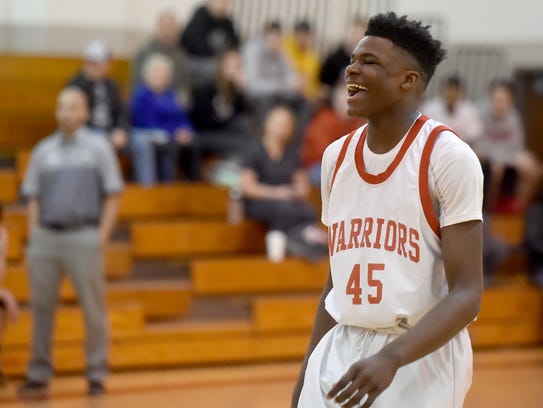 “He’s always smiling and get a lot more joy out of playing basketball when he plays at Susquehannock,” said Horace Walker of his son, Jarace, 14. “It’s a lot less pressure. He’s having a lot of fun playing.” Jarace, an eighth grader at Southern Middle School, is a national Top 10 prospect for his age group (Photo: Jason Plotkin, York Daily Record)

At least for now, Jarace talks as if he wants to go. He discusses the topic with a politeness, humility and maturity beyond his years.

“The education and the basketball these (private) schools have to offer, it’s reasonable for me not to stay.

“Tons of parents, kids, my peers, they all ask me to stay. They don’t think it’s the right decision to leave because I still get exposure from AAU and get better during AAU. But the education and getting better during the school season is important also.”

His father said Jarace needs an educational and basketball environment that continues to motivate and challenge him. He wonders if his son can find that at Susquehannock or anywhere in the YAIAA.

And yet he sees the impact Jarace has on his teammates now, how his focus on them has made everyone better.

“That comes from him not being selfish,” his father said. “Jarace would rather give those kids a layup than him having a layup. When he does that it elevates them and gives them confidence.

“He’s always smiling and he gets a lot more joy out of playing basketball when he plays at Susquehannock. It’s a lot less pressure. He’s having a lot of fun playing.”

The decision looms ever-larger. Would he gain more from playing alongside, and against, some of the best talent on the East Coast every day … or from serving more roles to lead and lift up his home school team? Would he thrive more in a private or public school setting?

“I think the entire community wants him to stay, and we live in a very close community that loves their athletes and comes out and supports them,” his mother said. “That’s the one thing he won’t have (if he leaves), the community support. They’ve known him since kindergarten, so it’s personal.”

The final decision may come in days or weeks, or maybe not for a while longer. It’s one most his age will never have the opportunity to make.

Horace and Marcia Walker say they are trying to embrace the process rather than worry about it. They claim their son’s academic future is just as bright as his basketball.

“You’re in a position where you can choose schools that are the best, top of the line for your kid,” his father said. “We’re in that position. Thank God that we are.”

https://usatodayhss.com/2018/jarace-walker-eighth-grade-basketball-star
One of the nation's top 8th-grade basketball stars is in Pennsylvania. But will he stay?
I found this story on USA TODAY High School Sports and wanted to share it with you: %link% For more high school stories, stats and videos, visit http://usatodayhss.com.