Jarrett Fultz shakes as he approaches the first tee. His legs and hands tremble.

He pulls out a driver, tees it up, and with a couple of practice swings, strikes the ball farther than any of his teammates, nearly 300 yards.

Everything comes together in an instant for the American Leadership Academy-Gilbert (Ariz.) North junior, who was diagnosed at age 2 with cerebral palsy. He has what his father describes as “intentional tremors,” meaning when he is trying not to shake, the tremors show up more.

Fultz, 17, is his school’s No. 1 golfer, who averages 270 yards off the tee with his driver, who regularly finishes in the top three in high school tournaments, and who will take his clubs to Grand Canyon University’s golf course on Saturday and walk the 18 holes in his quest for the Canyon Athletic Association state high school championship.

“I don’t feel like anybody notices anything — except his low scores,” said Reilly Keele, one of the golf coaches for the team.

Fultz has learned to cope with the tremors, the shaking. He walks the course, even when the sun gets brutal in the summer.

“I’ve always looked past it, worked with it,” he said. “I try to be the best person I can be, even with the circumstances that I have.”

Fultz started to come out of his mother’s womb with his left arm first. That prompted an emergency Caesarean section on his mother, Allison.

“When he was born, he was having seizures,” said Jim Fultz, Jarrett’s father.  “We knew there were issues. As he developed, his left side was affected and tremors began to show up and he had balance issues.

“He never let it deter him. We really didn’t talk about it very much when he was younger. We didn’t want him to feel like he was different or have it hold him back.”

Fultz is the youngest of five. He has three older brothers — Brock, Josh, and Jake —  who were standout baseball players at Queen Creek High. His sister, Christiane, who is closest to age to him, played with him the most growing up.

Jim Fultz would run baseball camps. He would bring the 500 plastic golf balls that he ordered with him and one of Jarrett’s brothers would pitch to Jarrett for hours and Jarrett would hit them with a bat.

“He’s been hitting things all his life,” Jim said.

Jarrett played year-round club baseball, playing first base and center field before he began taking golf seriously in middle school. He was 11 when he took up the game.

“He wasn’t able to tee up his own golf ball in the beginning,” Jim said. “But over time he was able to adapt.”

His family has been his safety net, but Jarrett’s motivation always came from within, always believing he could not only keep up with everybody else but beat them.

“Always work as hard as you can and be the best you can be,” Jarrett says is the best advice his parents have given him. “And try to be the best person you can be.”

Fultz said he uses breathing techniques to manage the tremors on the golf course.

He finished one-over par in one tournament this year. He has been consistently in the top three in the last 14 tournaments ALA-Gilbert played in this year, head coach Kenny Halcomb said.

“The great thing is, when he’s out there playing with the other guys, there’s no difference,” Halcomb said. “He plays well just like the other guys play well. Take it one shot at a time. He has a fantastic attitude. It’s just a great tribute to him that he can just do it.”

‘He beats us all’

Halcomb said when Fultz first joined the golf team, he took him out to the driver’s range.

“He started hitting 4-irons,” Halcomb said. “I was absolutely amazed, almost in tears, to see him shake and to see him take that 4-iron back and put it on plane and to consistently hit shot after shot after shot. It’s a true testament of his devotion and desire to be the best he can be. He works hard at this game. Putting, everything, he works hard at it.” 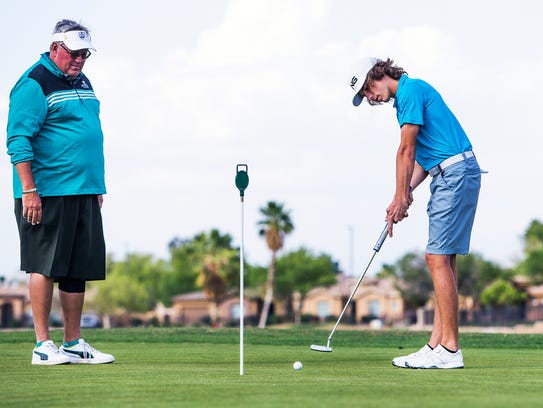 Fultz is home-schooled by his mom, whom Jim credits for Jarrett growing his autonomy and development in all areas of life, especially golf.

“She has been the one to take him to tournaments and manage everything,” Jim said. “She has been his biggest supporter and encourager.”

Every once in a while, there are family golf outings.

“He beats us all,” Jim said. “I love to play with him. We have a real good time. We usually do a match-play type of deal and he usually beats me.”

Jarrett has one more year of high school golf after this. ALA-Gilbert North will be moving into the Arizona Interscholastic Association next school year.

After that, he’d like to play college golf. His swings coach is Matt Van Cleave, who is the golf coach at Chandler-Gilbert Community College.

In the last year, Jarrett’s brother Jake has taken him to the gym to work out. It has led to his lengthening drives off the tee.

“To be honest with you, I don’t think about (the tremors),” Fultz said. “I just focus on what I’m trying to do. I just try my best. Whatever happens, happens.”

Cade Klubnik leads No. 3 Westlake to blowout win over Lake Travis in return

https://usatodayhss.com/2018/jarrett-fultz-cerebral-palsy-golf
Arizona golfer vies for state title despite cerebral palsy
I found this story on USA TODAY High School Sports and wanted to share it with you: %link% For more high school stories, stats and videos, visit http://usatodayhss.com.