PARKER CITY, Ind. — Following speculation that Leigh Ann Barga may not be retained as girls basketball coach, the Monroe Central school board voted 3-2 to keep her in that position on Tuesday evening.

Players, parents and program backers filled the seats inside the Millennium Room at Monroe Central, with several more standing in support of the coach who led the Golden Bears to a 25-1 record last year – including the first perfect regular season in program history. There were even folks from nearby schools there awaiting the decision.

The room was anxious as Barga’s name flashed onto the powerpoint along with the other sports appointments. Varsity girls basketball coach was the first of 14 coaching positions on the agenda between high school and junior high.

When it was announced that the vote went in Barga’s favor, a few got up and hugged the coach who is 66-11 with a sectional title in three seasons.

“I’m just excited,” Barga said. “Obviously I was hoping this would happen and I would be rehired. We’re just going to get the girls together and get ready. We’ve got a shootout on June 12, so we’ve got to prepare for that. … I’m just ready to be back and get the girls back in the gym and get going.”

School board members Brad Swallow, Andrew Wagner and Patrick Patterson voted in favor of bringing Barga back, while Dan Pike and Matt Deckman voted against it. Pike and Deckman, both of which have family members on the team, declined to comment when approached by The Star Press after the meeting.

Both did speak, however, right before adjournment about how the situation has blown up over the past few weeks. There was a rally before the executive session last Thursday. 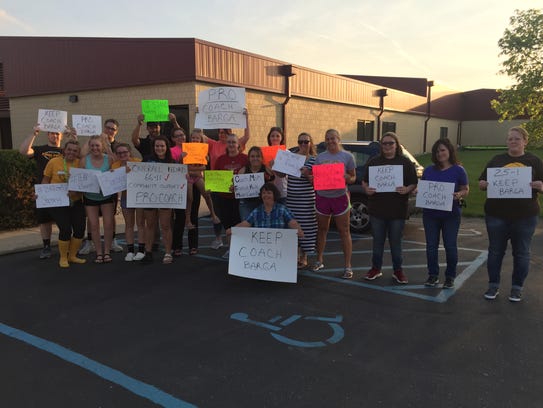 A group of about 25 came out to show their support for Monroe Central girls basketball coach Leigh Ann Barga as the school board held an executive session on Wednesday, May 2. (Photo: Jake Fox/Star Press)

“I love this community. I love the passion of this community,” said Pike, who acknowledged that the large crowd was obviously there for Barga. “I can agree to disagree agreeably. It’s how we move forward from here. … It’s time to put this to bed.”

Deckman followed by saying that he will support the decision and that there’s no one who wants to see the school succeed more than him. “I’m praying that I’m proved wrong,” he said.

Two members that voted yes, Andrew Wagner and Brad Swallow, also addressed the audience during this time. Both expressed the need for the community to come together to make sure this situation gets back on track.

“I’m not angry, I’m disappointed in how we handled it,” Wagner said. “We took an action tonight. But the solution is much bigger.”

A couple people spoke on Barga’s behalf during the public comments portion of the meeting including Mandy Crawford, mother of freshman player Madalynn Crawford, who read a speech her daughter wrote because she couldn’t make the meeting.

“I don’t think in the whole time I’ve been playing basketball with our school, I’ve ever loved a coaching staff so much,” Crawford read. “I have only played one year, but I already can’t wait for next year. These are the coaches some girls need.

“My daughter’s not the best,” she added in her own words, fighting back tears. “But she loves the sport, thanks to coach Barga.”

Now that the dust is settling, it’s time one of the top programs in the area to get back to work.

Barga hung around after the meeting and talked with and hugged several supporters. The whole time she was wearing a brown “MC Lady Bears” shirt, signifying that she came in ready to continue what she has started.

“We’ve got a lot to build on, and we’ve got a good core group already,” she said. “It’s a good time at Monroe Central.”

For more, visit the Star-Press

Florida going ahead with current fall prep sports as scheduled

Gatorade Player of the Year 3w ago

Florida going ahead with current fall prep sports as scheduled

Gatorade Player of the Year 01 Jul

The 20 highest-rated high school football recruits of all time

https://usatodayhss.com/2018/leigh-ann-barga-retained-monroe-central
Coach who went 25-1 last season retained despite speculation she'd be let go
I found this story on USA TODAY High School Sports and wanted to share it with you: %link% For more high school stories, stats and videos, visit http://usatodayhss.com.