The stands were filled with college baseball scouts, all waiting to see Luke Leto, the 14-year-old with the long flowing hair and the 90 mile-per-hour fastball.

Leto was scheduled to pitch in a tournament last summer in Georgia, and at least 20 scouts showed up to watch this gifted five-tool player from Portage, Mich.

He is one of the best prospects in the country — and several coaches say he has the potential to be a first-round draft pick in the 2021 major league baseball draft.

“When he comes to Georgia, there is a huge buzz,” said Rick Goff, the owner of Travelball Select, an organization that hosts elite national youth baseball tournaments in Atlanta. “When Luke Leto is in town, you gotta go see him. It’s almost like a rock-star following.”

Only there was a problem.

Leto had left a day earlier to go to North Carolina to try out for USA Baseball’s 14U National Team Development Program.

So Goff went around and told the scouts, including coaches from Virginia and Duke.

“Those stands cleared out in less than five minutes,” Goff said.

Leto, now 15, is ranked the No. 1 prospect in the country for the class of 2021 by Prep Baseball Report and No. 4 overall by Perfect Game. He just finished his freshman year at Portage Central High School, a season in which one of his pitches touched 93 miles per hour on a radar gun. 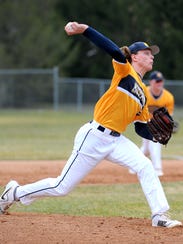 As talented as Leto is as a pitcher, he’s just as good in the infield and at the plate.

Leto is a left-handed batter who hit over .500 this spring in high school and has home-run power. He is a talented shortstop with a strong arm and impressive range. And he is lightning quick, capable of turning routine singles into doubles.

Which makes him a rare five-tool prospect.

“I would argue he has the potential to be the best high school player since Derek Jeter,” said Orchard Lake St. Mary’s coach Matt Petry. “He’s that special. Obviously, he has to develop. Elite-level talent. He certainly has all the tools.”

Last week, Leto verbally committed to attend LSU, although few expect him to play in college.

“He won’t step foot on a college campus unless his parents insist on it,” Goff predicted. “He will go top 10 in the draft.”

“Should he continue on this development path, he could certainly go in the top five picks overall out of high school,” Petry said. “It’s that type of talent.”

Rankings, of course, mean nothing, especially at this age. And rankings certainly don’t predict long-term success. But they offer a clear indication of how Leto is viewed by scouts and talent evaluators.

“He was the best player this year in Michigan,” said Aaron Wilson, the Prep Baseball Report Director of Scouting in Michigan and an associate scout for the Texas Rangers.

Not just the best freshman — the best player in Michigan.

“Luke is a special talent,” said Jason Maxwell, the USA Baseball 15U National Team manager. “He has that rare combination to be talented as a legit dual player. His intangibles are rare.”

There have been plenty of talented baseball players to come out of Michigan.

There have been pitchers who could throw in the 90s — Detroit Western’s William English was drafted by Los Angeles in the fifth round of the 2018 MLB draft.

There have been incredible athletes who could swing the bat — Brighton’s Drew Henson hit 70 home runs in high school and was drafted in the third round in 1998 by the New York Yankees.

There have been players who could pitch and play shortstop — Birmingham Brother Rice’s Matt Rupenthal went to Vanderbilt and is now in the Houston Astros’ organization.

There have been gifted hitters with great gloves — D.J. LeMahieu went from Brother Rice to LSU and was drafted by the Chicago Cubs in the second round of the 2009 draft. He is now with Colorado.

And there have been plenty of highly-touted prospects — Flint’s Jim Abbott was taken in the first round (eighth overall) by the California Angels in the 1988 draft.

But Abbott came before Jeter, who was taken in the first round (sixth overall) by the Yankees in the 1992 draft.

Which says all you need to know.

There just haven’t been that many players in Michigan who have all the tools that Leto has — somebody who is this athletic and can pitch and hit and field and run and pitch some more.

“He’s probably the closest thing we have had to a five-tool player since Derek Jeter,” Wilson said. 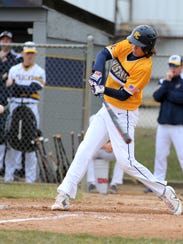 Leto gained a national reputation because he has played travel baseball for different teams all around the country. That has increased the hype and focus on him.

“There has never been a guy in Michigan who is as highly-touted as Luke Leto and that includes Derek Jeter, simply based on the times,” Wilson said. “I’m not saying he’s better than Jeter. Just based on the times, when we recruit kids earlier. The times have changed. I’ve known about Luke since he was in the sixth grade.”

Leto has handled the hype with a level head.

“It’s all projection,” said his father, Tim Leto. “Honestly, I don’t think Luke gets wrapped about it, and I know I don’t. Around him, we don’t get too worked up about the rankings.”

Many elite athletes stick to one sport, practicing year-round.

But this is where this story takes a surprising turn.

In an age of specialization, Leto is something special, a true three-sport high school athlete. He plays baseball, football and basketball — and he is exceptional at all of them. He started on the varsity basketball team last winter as a freshman and was named all-conference.

But still, trying to juggle all three sports has been a challenge.

“He definitely gets pulled in all directions,” Tim Leto said. “It’s harder and harder. But coaches at Portage Central have been pretty good and they work together.”

Leto can’t make it to summer basketball games right now because he is busy playing baseball. He plays for Team Elite, a prestigious travel team based in Georgia. And he won’t be able to make it to preseason football practices in August because he is expected to make Team USA Baseball’s 15U team, which will play in Panama.

“If he makes USA Baseball, he won’t be back from Panama, until I think, the day of the first football game,” Tim Leto said. “Then, he (can) join in and probably start out at wide receiver.” 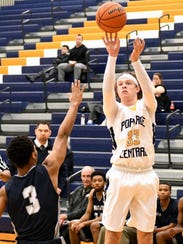 Last year, Leto made the USA Baseball developmental team, where he impressed Maxwell.

“Luke is that kid that doesn’t come along that often, especially in baseball,” Maxwell said. “He is not only athletic and fast but he knows how to play the game. He is highly intelligent on the field with a great temperament for the game. His peers all respect him on and off of the field, which lets everyone know what kind of person and teammate he is.

“It is always hard to project how good a player will become, especially at 15, but if Luke continues on this path he has a chance to play the game for years to come and have a large amount of success in doing so.”

What does the future hold?

Finally, there is one more thing to like about Leto — his attitude.

“What sets him apart for someone of his ability is that he is a very humble kid, and that is not always the case in this day and age,” Maxwell said. “His humbleness is something that I don’t see changing and it will take him very far in the game of baseball.”

Leto started out playing travel ball in Kalamazoo, but his reputation quickly spread. He joined other teams, including the Motor City Hit Dogs, the top travel program in Michigan.

“He’s very humble,” Goff said. “His parents keep him that way. Tim keeps a close watch on him, his pitch count, his days off. To his credit, he’s hard-core.” 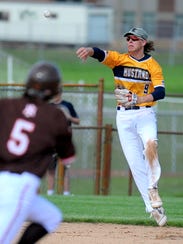 Leto wanted to play in the SEC and decided to go to LSU. “It checked all the boxes,” Leto said. “It was a big stadium. When I stepped on campus, I loved it. I’ve always been a fan of LSU since I was young.”

After verbally committing with LSU, Leto feels as if he is starting again.

There is one simmering question about Leto: What position will he play once his body starts to develop?

He has never really weight lifted. “No, I really haven’t,” Leto said.

Mainly because he hasn’t had time.

So he is bound to get stronger and bigger. Some think that when he puts on some weight, that he will move to a corner infield position.

“He’s going to get bigger,” Goff said. “To me, corner infield is in his future. But Cal Ripken was 6-4 and played shortstop, so anything is possible.”

That’s the main point about Leto.

Because he is so talented and has such a good head on his shoulders.