MARTIN, Tenn. — Ty Simpson and his dad, Jason, were driving back to Martin from Nashville.

Ty had just finished with his 7-on-7 team, J3MSelect, when he got a message. It was from one of premier college programs and its head coach, University of Michigan’s Jim Harbaugh.

Ty, who’s an eighth-grader at Martin Middle School, couldn’t believe it. Ty had tweeted out videos showing him going through footwork and throwing drills.

What came next shocked even him: Harbaugh extended an offer for the 2022 quarterback.

Blessed to receive my first offer from the University of Michigan #gowolverines #2022 pic.twitter.com/nNKDLZWL92

“I really didn’t believe it at first,” Ty said. “I was like oh, he’s just being nice because he knows my dad and I was like they aren’t going to offer me, but I went up there a visit and it was crazy and (they) happened to offer me, so it was a crazy day.”

Jason is the head football coach at University of Tennessee at Martin. He’s built many relationships over the years with numerous college coaches, Harbaugh included.

He didn’t know what to expect on the visit to Ann Arbor. As a father, he was proud to see Ty get the offer, but he’s aware it won’t help him on the football field.

“The tradition of that program and coach Harbaugh and his work with quarterbacks and him as a player, it was a pretty neat deal,” Jason said. “I think Ty knows that it doesn’t help you on Friday nights. Now, you gotta go out and be ready to compete and make some great memories on the high school field.”

Ty, 15, is 6-foot-1 and weighs 170 pounds. He is planning on attending Westview High School in Martin in the fall. He has a scholarship offer before obtaining his drivers permit. But it won’t change his duties around the house.

“Like I told him, you still gotta take out the garbage,” Jason jokingly said. “Things don’t change around our house.”

He also visited Indiana last weekend. Football was never at the forefront for Ty. He also plays baseball for his middle school. Over the years, he became fond of football.

It changed the outlook on what he wanted to do in the future.

“At first, I thought I was going to be a baseball player,” Ty said. “I didn’t really think I was built (for) football like I was. But then, me and my dad were throwing one day and he was like ‘Ty, I really think you need to start working with my coaches more just to see where it goes.’”

Since then, he’s grown and continued to develop.

The talent and the heightened expectations will follow him into his high school career.

The last few weeks have been a whirlwind for him. But for now, Ty is enjoying the moment.

“It’s just a blessing and crazy how everybody is reacting to it. It’s just fun. I love it.”

For more, visit the Jackson Sun 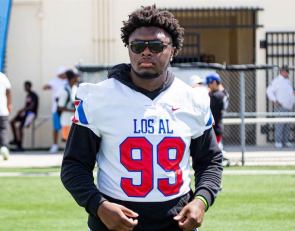