“Although it would be an honor to be involved, coaches Cal and Ron Lee, co-athletic directors Ryan Blangiardi and Gerald Welch spent the last few days considering if this trip would be in the best interest of our students,” Medeiros said. “Although traveling is a wonderful way to educate students about the world around them, proving more exposure for our athletes, this particular game takes place during finals week. For this reason, students attending would have to miss their final exams. Additionally, not all players would be able to make the trip, given certain limitations which include the number of hotel rooms available and the cost associated with travel that the school would subsidize (and) families being responsible for assisting financially.”

Rashid Ghazi, of Paragon Marketing Group, which created and runs the GEICO Bowl Series, said they “were surprised they declined.”

“They had agreed to play in the event,” Ghazi said. “The package we were providing Saint Louis was all expenses paid, including flights, hotels, meals, accommodations and ground transportation for a traveling party of 75 plus a cash rights fee for the school and one for the HHSAA.”

The GEICO Bowl Series features two matchups, which will be played on Dec. 22 at 7:30 p.m. and 11 p.m. EST and televised live on ESPNU. The location is yet to be determined.

Saint Louis knocked off Mililani (Hawaii) 38-17 this past weekend in the Open Division state title game at Aloha Stadium.

The win gave the Crusaders their second-consecutive undefeated season.

The four teams in this year’s GEICO Bowl Series will be announced in the coming weeks. 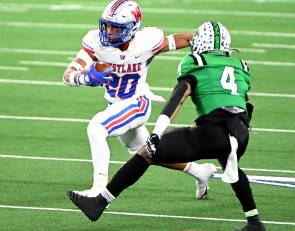 https://usatodayhss.com/2018/no-15-saint-louis-school-hi-declines-invite-to-the-geico-bowl-series
No. 15 Saint Louis School (Hawaii) declines invite to the GEICO Bowl Series
I found this story on USA TODAY High School Sports and wanted to share it with you: %link% For more high school stories, stats and videos, visit http://usatodayhss.com.