SOUTH BEND – Before Nick Saban offered him a scholarship in eighth grade, before he was a four-star quarterback prospect, and before he committed to play football at Notre Dame, Drew Pyne was a water boy.

For his brother, that is. And a few other hot shots at IMG Academy in Florida. He’d do it just for fun in middle school when he and his family came down from Connecticut to visit his older brother Brendan, now a linebacker at Brown. Brendan’s teammates — specifically former Ole Miss and current Michigan quarterback Shea Patterson and Florida State quarterback Deondre Francois — noticed Drew’s talent. He was eager to learn and asked questions, so they took the water boy in and taught him the ropes on those visits.

Drew Pyne, 17, grew to be a 6-1, 172-pound four-star pro-style prospect and now has more than 20 offers from Power 5 programs. He committed to Notre Dame in April, but won’t be on campus for two years because he’s a member of the 2020 class.

Pyne, who starts for New Canaan High School in Connecticut, is the No. 1 quarterback in the state and Rivals recently ranked him the No. 37 overall prospect in the country. He first threw for Irish offensive coordinator Chip Long and quarterbacks coach Tom Rees last June at a Notre Dame camp, which quickly earned him an offer. He returned to campus in September for the Georgia game, went to Orlando over New Year’s for the Citrus Bowl, visited South Bend again in April, and committed a few days later to become the Irish’s first member of the 2020 class.

As a sophomore, Pyne threw for 2,355 yards with 25 touchdowns to 11 interceptions, and rushed 93 times for 273 yards and seven touchdowns. He also and led New Canaan to a state championship his freshman year.

“He’s one of those kids that, from the beginning, had something special about him,” said QBCountry quarterbacks coach David Morris, who has been training Pyne in the offseason since seventh grade. “He stood out mechanically and was in a position where he looked beyond his years. The first word that comes to mind is twitch. He’s got quick feet, quick hips, and a quick release. He plays with a lot of confidence.

As far as future competition goes, Brandon Wimbush has two years of eligibility remaining and highly touted incoming freshman Phil Jurkovec will arrive on Notre Dame’s campus this summer. The Irish do not currently have a quarterback in their 2019 class after Cade McNamara decommitted in March in favor of Michigan, and Brian Kelly hasn’t offered any other quarterbacks for 2020.

Like Jurkovec, Pyne has received a lot of national attention. He had five offers as an eighth grader, from Alabama, South Carolina, Penn State, Missouri and Florida State. A lifelong Brady Quinn — and “Rudy” — fan, he always wanted to go to Notre Dame. Quinn tweeted at him after he committed to his alma mater.

Happy to hear @dpyne10 committing to @NDFootball!!! Life changing decision! I hope you enjoy your experience as much as I did. #10 #4for40 #GoIrish #NDFamily

Pyne never felt pressure from the amount of early offers. He admittedly was surprised how quickly they came though, especially from Saban.

“For him to take a chance on me that young, it’s unbelievable,” Pyne said.

Brendan remembers his brother being mature and pragmatic through the process.

“And if it ever gets to his head, we knock him into place.”

Drew and his family treated the scholarship offers like a business. A natural approach given his father, George, served as the former chief operating officer at NASCAR and was the president of IMG Sports and Entertainment before becoming the president of Bruin Sports Capital.

“My dad was always like, ‘Listen, if you let this get to your head, you’ll never play at Notre Dame,’” Brendan said. “He always reminded Drew to do his best and try hard because there are other people trying to outwork you. He reiterates that and never lets Drew get a (big) head.”

It also helps that nearly every man on his dad’s side of the family has gone through a similar experience. Seven Pynes have played college football, including Drew’s father and brother, and two played in the NFL. This doesn’t include his cousin Kevin, a five-star offensive tackle from Millis (Mass.) High School, who is considering Notre Dame and Michigan. 247Sports ranks him as the No. 19 overall prospect in the 2020 class.

This sports lineage doesn’t include Paul Harney, Drew’s grandfather on his mother’s side, who is in the PGA Hall of Fame.

Pyne is a humble, sharp kid who writes thank you notes to Morris after every training session. He already knows he wants to major in business when he gets to Notre Dame, and understands he still has a long way to go — technically, two years — before he can compete at that level.

When asked again, he’s still not quite sure how he managed to get recruited so early.

“I just realized then that it’s an opportunity to play at the next level and it doesn’t mean anything unless you keep working and competing with a bunch of really good guys,” Pyne said. “So I just took it with a grain of salt.” 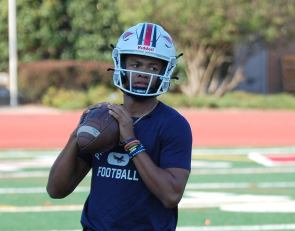 https://usatodayhss.com/2018/notre-dame-football-drew-pyne-quarterback
Notre Dame's QB of the future still two years away—but worth the wait
I found this story on USA TODAY High School Sports and wanted to share it with you: %link% For more high school stories, stats and videos, visit http://usatodayhss.com.