The Polynesian Football Hall of Fame has announced five finalists for the 2018 Polynesian High School Football Player of the Year Award, presented annually to the most outstanding senior high school football player of Polynesian ancestry. Crescent Valley (Corvallis, Ore.) star and current USC safety Talanoa Hufanga was selected as the inaugural recipient of the award in 2017.

“This award showcases the immense talent of our Polynesian student-athletes in high school football today,” said Jesse Sapolu, Polynesian Football Hall of Fame Chairman and Co-Founder, in a statement. “We congratulate to each finalist and their families.”

The finalists will be recognized during the Polynesian Football Hall of Fame Enshrinement Weekend on O’ahu, Hawai’i. The Player of the Year will be announced and honored during the celebration dinner on Jan. 18, and again at halftime of the Polynesian Bowl at Aloha Stadium on Jan. 19.

The finalists, which were selected from a “Watch List” of nearly 50 players, are as follows:

The Boise State commit of Samoan ancestry led the Braves through a 13-1 record that saw them reach a No. 1 overall ranking for four weeks in USA TODAY’s Super 25, before falling in the CIF Southern Section Final. He rushed for 1,172 yards with 18 rushing touchdowns and averaged 8.6 yards per carry for his final season. Holani has been selected to play in the 2019 Polynesian Bowl.

The USC commit of Samoan ancestry led the Tigers to a 12-2 season and the Utah 4A state championship. In the process, Nacua set state single-season records for receptions (103), receiving yards (2,336) and receiving touchdowns (26). His 2,336 receiving yards are the fifth most all-time in a single season nationally. Nacua, ranked as the No. 2 overall recruit in Utah by 247 Sports, has been selected to play in the 2019 Polynesian Bowl.

The Hawaii native and Alabama commit of Samoan ancestry led the Warriors to their first-ever state championship game appearance, passing for 3,728 yards and 35 touchdowns and adding 417 yards and six more scores on the ground. The younger brother of 2018 Heisman Trophy runner-up Tua Tagovailoa is ranked by 247 Sports as the nation’s No. 5 overall pro-style quarterback by 247 Sports. He’s been selected to play in the 2019 Polynesian Bowl.

The two-way star of Samoan ancestry led the Spartans to a CIF Open Division Bowl state championship appearance and as high as a No. 6 ranking in USA TODAY’s Super 25. He led the Spartans in both rushing and tackles, and is ranked by 247 Sports as the nation’s No. 2 overall outside linebacker. To’oto’o has been selected to play in the 2019 Polynesian Bowl. He is uncommitted, with a final five of Washington, Alabama, Tennessee, Cal and Oregon.

The Washington commit of Samoan ancestry played a major role in the Crusaders’ undefeated season and Hawai’i state championship, which has them currently ranked No. 14 in USA TODAY’s Super 25. On the season, he racked up 16 tackles for loss and 10 sacks. Ranked as the No. 1 overall player in Hawai’i by 247 Sports, Tuitele has been selected to the 2019 Polynesian Bowl. 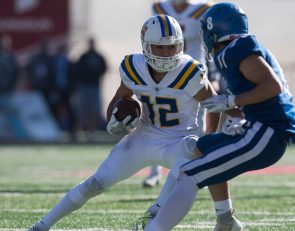 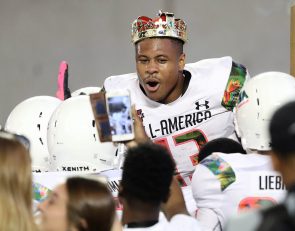 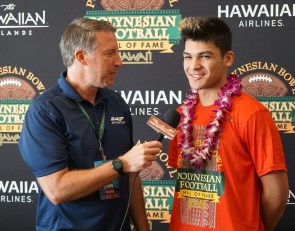 https://usatodayhss.com/2018/polynesian-high-school-player-of-the-year-finalists-announced
Polynesian High School Player of the Year finalists announced
I found this story on USA TODAY High School Sports and wanted to share it with you: %link% For more high school stories, stats and videos, visit http://usatodayhss.com.