Louisville basketball’s recruiting momentum continued on Monday with a pledge from Class of 2019 wing Samuell Williamson, a smooth scorer from Texas.

Williamson, a 6-foot-7 four-star prospect, committed to play for Chris Mack and Louisville after spending the weekend at U of L for a campus visit. He picked Louisville over Kansas, Oklahoma, Texas A&M and Texas Tech.

A native of Rockwall, Texas, which is a Dallas suburb, Williamson is ranked between 34th and 52nd in the nation by the three major recruiting websites. Each considers Williamson a four-star recruit.

As a junior at Rockwall High, Williamson helped his team reach the regional quarterfinals of the playoffs in the state’s largest classification. He made the Dallas Morning News’ all-area team and the Texas Association of Basketball Coaches’ all-state team after averaging 23.3 points and 10 rebounds per game.

Ramsey visited U of L over the weekend with Williamson. Ramsey has repeatedly said he wouldn’t make a college decision until the spring.

Louisville’s coaching staff can now turn their attention to landing at least one more guard in the 2019 class, plus a post presence. The Cards are in hot pursuit of Trinity High senior David Johnson, and they’ll host top-50 guard Rocket Watts and top-50 big man Aidan Igiehon for official visits at the end of the month.

In all, Louisville has six scholarships available for Class of 2019 signings, though that number could grow in the spring if any current Louisville players move on. 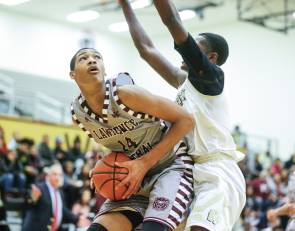