Her players and hundreds of others were at the Englert Theatre on Sunday in Iowa City for the hometown screening of “The Miracle Season,” a movie based on the Women of Troy’s volleyball championship in 2011.

With dozens of cameras and microphones pointed toward seven of her players — all clad in flowing dresses and wearing makeup as they stood for red carpet questions — she noticed one thing: they were all holding hands.

“It makes my heart burst with pride,” Bresnahan said. “I look at them, they still gather strength from each other. When they’re in a tough situation, they look out for each other.”

“They haven’t let go of each other’s hands since they got up there.”

Set in 2011, the volleyball team’s star player Caroline Found dies in a moped accident, leaving the team without an incredible athletic talent and an incredible friend.

‘THE MIRACLE SEASON’: Meet the real people who inspired the movie

All the while, Ernie Found — played by Oscar-winner William Hurt — is dealing with the loss of his daughter and his wife, Ellyn, who dies from cancer days after their daughter’s funeral.

The team, under the tutelage of Bresnahan — played by Oscar-winner Helen Hunt — winds up coming together and wins the state championship in the wake of their teammate’s death.

The hometown premiere was filled with all of those who were portrayed in the movie, something that was comforting for the filmmakers and actors at the screening. David Aaron Cohen, the screenwriter for the movie, said “this is the audience I most want to see the movie” while on the red carpet.

Members of the 2011 Iowa City West High volleyball team answers questions from the red carpet of the hometown premiere of The Miracle Season, a feature length film about the team winning the state championship after the death of their teammate Caroline Found weeks before the start of the season, on Sunday, March 18, 2018, at the Englert Theatre in Iowa City.  (Photo: Kelsey Kremer/The Register)

Having visited Iowa four times to talk to Ernie Found, Bresnahan and former West volleyball players, Cohen hoped he had captured the force of nature that was Caroline Found.

“She had so much energy, so much life,” he said.

Wearing the blue “LIVE LIKE LINE” T-shirt on the red carpet, Danika Yarosh, who plays Caroline Found in the movie, reflected on meeting the family of the real person she portrayed.

Before the buzz of the red carpet kicked off, Ernie Found discussed the moment he met Yarosh on set, the young actress wearing a West High volleyball jersey and his daughter’s number.

Danika Yarosh, one of the stars of The Miracle Season answers questions from the red carpet during the film’s hometown premiere on Sunday, March 18, 2018, at the Englert Theatre in Iowa City.  (Photo: Kelsey Kremer/The Register)

“It was a surreal moment to see No. 9 moving and talking and smiling. It took my breath away. After we greeted and hugged, I had to walk away a bit,” Ernie Found said. “I wished someone else had been there for that hug, but that’s OK. Danika, luckily, has been a real gem and took it on.”

The two went on to talk about Caroline Found a lot before and during shooting. They even embraced in a big hug on the red carpet.

“Even after everything he’s gone through, he’s such a teddy bear who just radiates light and love,” Yarosh said.

That kind of connection to the real-life people behind the tragedy and inspiration was important to director Sean McNamara, who flew out to Iowa before filming to meet those he would be portraying on the big screen.

McNamara, being a father like Ernie Found, cried and drank beer and broke bread with the father at the heart of the movie as they talked about the story. He was blown away by the force with which Caroline Found lived her life.

“She brought something to the world in her 17 years that inspired the world and made it a better place,” the filmmaker said

After the red carpet, a sold-out audience at Englert sat in their seats and saw Bresnahan introduce a series of speakers: producers, Ernie Found and the former West High principal Jerry Arganbright, who reflected on his 31 years at West.

Noting that he had seen a long list of amazing things during his decades at the school, Arganbright said “that summer of the 2011 volleyball team stands on top of that list.”

“We sort of felt like we were living through a movie.”

When Bresnahan brought Ernie Found to the stage, the onlookers rushed to their feet for a thunderous standing ovation. The father broke out in tears once as he attempted to make the audience feel better, saying: “It takes 43 muscles to frown, and 17 small ones to smile. Let’s choose to smile.”

Movie goers fill the Englert Theatre for the hometown premiere of The Miracle Season, the feature length film about the West High volleyball team winning the 2011 state championship after the death of their teammate Caroline Found weeks before the start of the season, on Sunday, March 18, 2018, in Iowa City.  (Photo: Kelsey Kremer/The Register)

The movie featured a short introduction by Hunt, but as soon as the film started, the audience was rapt. They cheered when they spotted familiar faces making cameos, they laughed at the antics of Yarosh as Caroline Found. They sang along when “Sweet Caroline” by Neil Diamond started to play.

Bresnahan, before the movie began, said she was more than happy to see a movie based around “powerful women,” both the ones who passed away and those who spiked a volleyball.

It was then, on the red carpet, with her former players holding hands again in a moment meant to celebrate those powerful women, she was beyond joy.

“That’s how we got through everything: we had each other. They’ve become such amazing women. I’m just proud,” Bresnahan said. 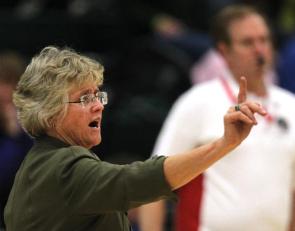