On the coldest night of the season last fall, Tom Lynch was two hours from home, attending New Rochelle’s state playoff game against Troy. He sat in a wheelchair on the sideline, bundled from head to toe in jackets, blankets, hats and hoods.

The North Rockland football coach had already endured two surgeries by that point, one to remove a kidney, another to shave cancerous bone off his femur and replace his left knee. Lynch was filled with drugs to fight the aggressive disease, but he couldn’t stay away.

Despite missing all last season and taking a leave of absence at school, Lynch attended every North Rockland game but one, broke down film, compiled stats and braved brutal cold and wind to watch Section 1’s best compete long after the Red Raiders turned in their jerseys.

“It just gave me something to do,” Lynch said this week. “I was bored out of my mind.”

With his health improved, Lynch has returned to his post. He not only expects to return to school full-time in September, he has already begun to resume his head coaching duties.

“We’re ecstatic,” said Joe Casarella, the school’s athletic director. “He’s been through a hell of a lot.”

Lynch returned this summer with the actual scars to prove it. Besides the one where his kidney was removed, he pointed to his noticeable limp as the more cumbersome byproduct of his fight.

Lynch’s left leg was cut from his thigh to calf for a knee replacement. He said doctors removed the knee cap and also portions of his upper and lower leg bones that were also cancerous. The leg will force Lynch to find a yet-to-be-determined method for coaching on the sideline.

He has no plans of coaching from the press box. He said he will learn to adjust at practice and on the sideline.

“I’m never going to be able to walk normally again, so demonstrating for the kids is tough,” he said. “I’ll have to use other kids to do it. I used to like doing it myself. I used to go one on one with (former star Eric) Favors back in the day. Those type of things I’ll miss, but I’ll adjust to it.”

A return to normalcy

It’s an adjustment Lynch and his longtime coaching staff are willing to make. North Rockland, one of the winningest programs in Section 1 history, finished last season 3-6. Their year began amid turmoil and shock; Lynch disclosed his diagnosis to Casarella four days prior to camp and told the rest of his coaches the first day of practice.

The inopportune timing thrust assistant Greg Grasso into the role of head coach. Grasso and the other coaches scrambled to fill other duties. 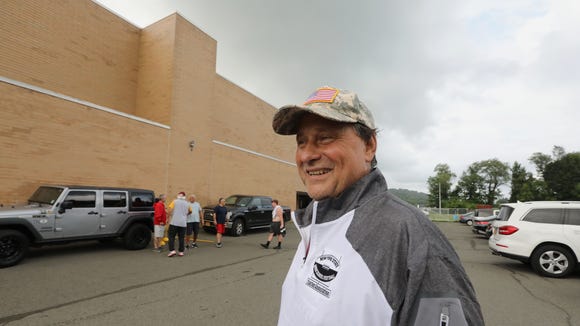 One of the assistants, Gary Dworkowitz, who has been with the program in some role since the mid 80s, said their adjustment paled in comparison to the challenges Lynch and his family faced.

Casarella acknowledged that the team faced adversity it never overcame. He also devoted praise to the coaches and players for their perseverance.

“It was a tremendous challenge for the coaches,” Casarella said. “I don’t think they got enough credit. I don’t think people realized what they went through. The kids were looking for Tom and he wasn’t there.”

Lynch tried to leave some mark. He attended practice once a week last season and stayed involved by breaking down the film.

‘I’m going to be here every day’

This time, Lynch will no longer be forced to spend so much time coaching from afar. He returned for the team’s camp in June and has been a presence at weight-room sessions, summer workouts and 7-on-7 passing scrimmages.

The Red Raiders are booked for a 7 on 7 in Connecticut this weekend and Lynch plans on coaching for the first time.

He is still receiving clinical treatments and has to undergo routine full-body scans. So far, the treatments have stunted the growth of whatever cancer remains, which has kept him hopeful about the future.

“I’m going to be here every day,” Lynch said. “I have to go for treatments every three weeks, but I’ll work around that so I can be there for practices and games. I expect to do what I used to do except I can’t demonstrate and I can’t get out of the way as quickly as I used to. I’ll have people around me supporting me, which is great.”

The battle with cancer has changed Lynch’s perspective. The Red Raiders return a fairly young team and will be without star Jayden Cook, one of lohud’s Super 11 in 2017, who transferred to Erasmus Hall in Brooklyn, but Lynch said he won’t be obsessed with results.

“I remember a few years back when we had our worst year, when we went 1-8 (in 2015), how devastated we all were,” Lynch said. “As a head coach, you take it personally. Now, I’m not as worried about wins and losses. I just want to be out there working with the kids and hopefully giving them a future. Hopefully, the wins come with it.”

https://usatodayhss.com/2018/tomy-lynch-returns-cancer-north-rockland-football
After cancer fight, New York football coach returns to sideline
I found this story on USA TODAY High School Sports and wanted to share it with you: %link% For more high school stories, stats and videos, visit http://usatodayhss.com.