Northwood Temple Academy (Fayetteville, N.C.) guard and Louisville commit Josh Nickelberry exploded for 75 points in two days over the weekend at the Carmel Christian Tip-Off Classic presented by Phenom Hoop Report. The four-star prospect from Fayetteville was electric with his ability to knockdown three-point jumpers from off-the-dribble.

Nickelberry went for 31 points on Friday night against Carmel Christian and followed it up with another outburst of 44 points on Saturday which included five made three-pointers.

Brewster Academy owns the night with powerful dunks in win

Nickelberry is set to join Chris Mack at Louisville in a 2019 recruiting class that is already being called the ‘Dream Class’ by fans. The Cardinals have successfully recruited five Top 100 prospects along with the 206th-ranked player according to 247Sports in Quinn Slazinski.

Irish-born Aidan Igiehon (No. 44) headlines the class along with Texas product Samuell Williamson (No. 45), hometown talent David Johnson (No. 72) and 6-foot-8 power forward Jaelyn Withers (No. 85).

Nickelberry is ranked No. 96 nationally by 247Sports and is considered one of the best shooting guards in the country.

Perhaps what’s most exciting about Nickelberry’s game is his size at 6-foot-4 combined with the next-level skill that he already possesses. Nickelberry’s jumper is silky smooth and he showcases an elite ability to break down defenses using screens to either pull-up from deep or slice through the defense and finish hard at the basket.

Nickelberry is a special talent that is set to do some major damage in his final season of high school basketball. 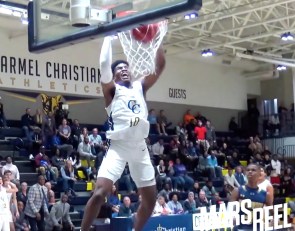 https://usatodayhss.com/2018/video-louisville-commit-josh-nickelberry-explodes-for-75-points-in-two-days
VIDEO: Louisville commit Josh Nickelberry explodes for 75 points in two days
I found this story on USA TODAY High School Sports and wanted to share it with you: %link% For more high school stories, stats and videos, visit http://usatodayhss.com.