The parents of a Buena Regional High School wrestler who was thrust into the national spotlight when an official required him to cut his dreadlocks or forfeit his bout expressed immense, heartfelt gratitude for the overwhelming show of support for their son.

Charles and Rosa Johnson, the parents of junior Andrew Johnson, released a statement on Monday morning through their lawyer Dominic A. Speziali.

“Andrew has been deeply moved by the thunderous outpouring of unsolicited support —  including from an Olympic wrestler, leading civil rights advocates and elected officials — after the shocking pre-match ultimatum,” the statement said.

“Wrestling has taught Andrew to be resilient in the face of adversity. As we move forward, we are comforted by both the strength of Andrew’s character and the support he’s received from the community. We will do all that we can to make sure that no student-athlete is forced to endure what Andrew experienced.”

Referee Alan Maloney instructed Johnson to have his dreadlocks cut in order to compete in a bout against Oakcrest’s David Flippen last Wednesday. Video of the incident published by SNJ Today went viral, causing a controversy that drew reactions from all over the country.

Olympic gold medalist and South Jersey native Jordan Burroughs and Gov. Phil Murphy were among those who weighed in on the incident.

Speziali sad the family is awaiting the results of an inquiry by the New Jersey Division of Civil Rights.

Maloney made headlines when he used a racial epithet to describe a fellow referee after a youth wrestling tournament in 2016.

Speziali questioned why Maloney was still allowed to officiate after the 2016 incident.

“As this matter is further investigated, the family wants to be clear that they are supportive of Andrew’s coaches and the team’s athletic trainer. The blame here rests primarily with the referee and those that permitted him to continue in that role despite clear evidence of what should be a disqualifying race-related transgression.”

Speziali’s statement provided the first details of what transpired before the bout and led to the controversy.

“The scholastic wrestling rules clearly state that referees are to inspect wrestlers’ appearance and determine any rules violations prior to the start of the meet, typically during weigh-ins. The referee here was late to the meet and missed weigh-ins. When he did evaluate Andrew, he failed to raise any issues with the length of his hair or the need to wear a head covering.

“He added that the referee later informed Nate Johnson, Andrew’s younger brother and teammate, that they would both need to wear a head covering or face disqualification.

As Andrew took to the mat to start his match, the referee examined and rejected the head covering he was wearing. In prior matches at a tournament the weekend before, Andrew was permitted to wrestle without issue, a fact that his coaches conveyed to the referee when pleading on his behalf. Andrew then requested he be allowed to push his hair back as he did the weekend prior, but the referee again refused because ‘it wasn’t in its natural state.”

Read the full story at the Courier-Post. 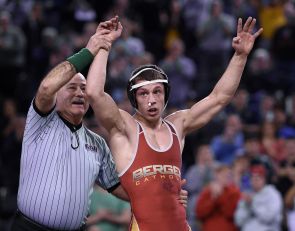 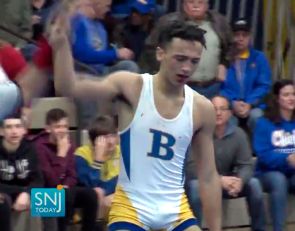