Cori Gauff, who shocked the world by upsetting Venus Williams in the first round Monday at Wimbledon, took down another opponent Wednesday and advanced to the third round.

She defeated 30-year-old Slovakian Magdalena Rybarikova in two straight sets — 6-3, 6-3. After winning on a deuce advantage point, she jumped in the air and pumped her fists, soaking in another upset.

Rybarikova, who is ranked 139th in the world, made it to the Wimbledon semifinals in 2017 and was ranked in the top 20 around this time last year.

15-year-old @CocoGauff beats former #Wimbledon semi-finalist Magdalena Rybarikova in straight sets to book her place in the third round pic.twitter.com/60juztgXej

On Monday, Gauff became the youngest player to win a match at the event since 1991, holding off Williams 6-4, 6-4 in straight sets. Gauff, who grew up idolizing the Williams sisters, had to fight her way to make the tournament field. She came in ranked No. 313 in the world and beat No. 1 seed Aliona Bolsova in qualifying rounds.

“This was the first time I ever cried after a match. While winning, obviously. … I never thought this would happen,” Gauff said on Monday. “I’m literally living my dream right now. And not many people get to say that. I’m just happy that Wimbledon gave me the opportunity to play.”

After that match, Williams, who has won Wimbledon five times, congratulated the youngest player in the tournament, and Gauff thanked her for being her inspiration.

“I think the sky’s the limit, it really is,” Williams said after Monday’s match.

Now Gauff looks to the third round on Friday, when she’ll play Slovenian Polona Hercog, who defeated No. 17 ranked Madison Keys on Wednesday. 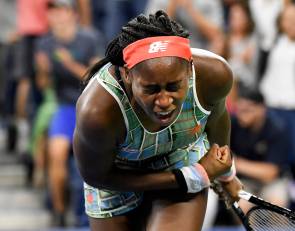