The team was chosen by the USA TODAY Sports staff in consultation with high school coaches and recruiting analysts.

Mater Dei quarterback Bryce Young torched some of the most stringent defenses in the country and showed an innate passing ability in and out of the pocket as he led Mater Dei to a 12-1 record.

He also had the freedom to call his own plays and audible at the line, which helped Mater Dei produce one of the best offenses in the country.

Young is the 2019 ALL-USA Football Offensive Player of the Year.

While Young is the top-ranked dual-threat quarterback in the country, he views himself differently than a “traditional” running quarterback. Young creates play with his feet, but his pinpoint accuracy and ability to deliver the ball on the money while on the move is impeccable. His quick-twitch release, like Steph Curry shooting a 3-pointer, allows him to get the ball out of his hands before defenders can get their hands up.

“People in the league, the Lamar Jacksons, Kyler Murrays, the Baker Mayfields, people like that are really pushing the envelope of what dual-threat means,” Young said. “People think a dual-threat is someone who can, a running back that can throw a little bit … but really dual-threat should mean, and it does mean in my mind, someone who has the ability that can really do both as far as extending plays and run the ball but is still a passer.”

Some of Young’s best games were against Super 25 teams and top national competition. Facing two-time defending Arizona 5A champion Centennial, Young went 31-for-37 for 528 yards and seven passing touchdowns. The next week, against then-No. 4 St. Frances Academy (Baltimore), Young rushed for four touchdowns. The following game, he threw for 428 yards and five touchdowns and completed more than 70 percent of his passes against St. John’s (Washington, D.C.).

“The one thing that will always stand out to me about Bryce Young is he is as level-headed a kid as I’ve ever been around,” Mater Dei head coach Bruce Rollinson said. “The moment is never too big and he never gets down when there’s a struggle and he never gets too far crazy, emotionally-charged when things are going good.”

Who is Alabama getting in Mater Dei quarterback Bryce Young?

After spending two seasons at Cathedral (Los Angeles), Young transferred to Mater Dei prior to the 2018 season. He said the first year had a learning curve as he got used to the offensive playbook. He relied on five-star receiver Bru McCoy as the Monarchs won the championship.

This year, without McCoy, Mater Dei had to find new weapons. With growth from the wide receiver corps, the Monarchs didn’t miss a beat.

Part of that came from the familial feel. Young said the biggest lesson he took away from this season is how important it is for a team to be close, whether it was through the offseason practices, pregame meals together or roast sessions as a team. These turned into his favorite high school memories.

“I felt there was a lot more love for each other in the locker room,” Young said. “When everyone’s on the same level, I’ve seen how important that is to come together both on the field and off the field and how it can translate.”

As the team gained chemistry, Young improved as a player. He had a better command of the offensive playbook, and with coaches allowing him to change the plays, Rollinson estimated Young called or audibled 60% of them. He displayed a greater feel for the game and could manipulate defenses to his will.

“The growth was astronomical. I was extremely proud of the level of everything, from deciphering the offense (to) leadership,” Rollinson said. “…He really dedicated himself in the weight room — not that he was undedicated the year before — but he realized that enhanced strength base would allow him to compete through the rigors of the God-awful schedule I presented them this year.”

Mater Dei lost in the CIF-SS Division 1 championship game, but Young had proven himself as the best offensive player of the season long before. With the Monarchs’ consistent domination over strong teams local and national, Young had one of the all-time great California seasons.

Over his 44 years as a Mater Dei faculty member, Rollinson has seen a long line of successful quarterbacks come through the school including future NFL players Matt Barkley and Matt Leinart and current USC quarterback JT Daniels. Young, committed to Alabama, is right with this group.

“The multiple facets that (Young) brought to the game and where he took the offense, because of his football intelligence,” Rollinson said, “(I) rank him right now as the best we’ve had.” 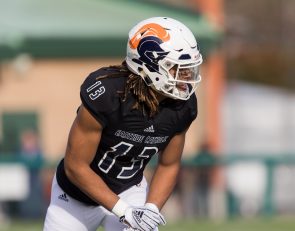