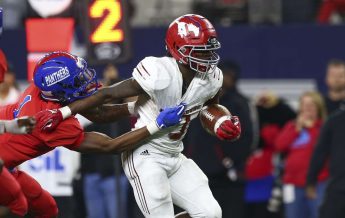 Why them: The Mustangs, who finished No. 2 in the final Super 25 Football rankings last year, return the bulk of their core for 2019 and look like they could repeat as Texas Class 6A champions for the first time since Kyler Murray led Allen.

The No. 1 running back in the nation Zach Evans, who rushed for 1,784 yards and 29 touchdowns last year, and four-star quarterback Dematrius Davis, who completed 71.6% of his passes for 3,350 yards and 43 touchdowns, return to lead the charge on offense.

The offensive line looks formidable with three-star incoming senior Damieon George, who is a 6-foot-6.5, 348-pound offensive tackle, and four-star junior offensive guard Jaeden Roberts. The two will help give the two time to make plays as Davis looks around his receivers, notably Shadrach Banks, one of the top incoming juniors in the country.

On defense, cornerback Joseph Wilson and linebackers Corey Flagg and Matthew Roberts will be relied upon as three-star recruits to carry the load. With talent and experience returning, North Shore looks to be among the best teams in the country.