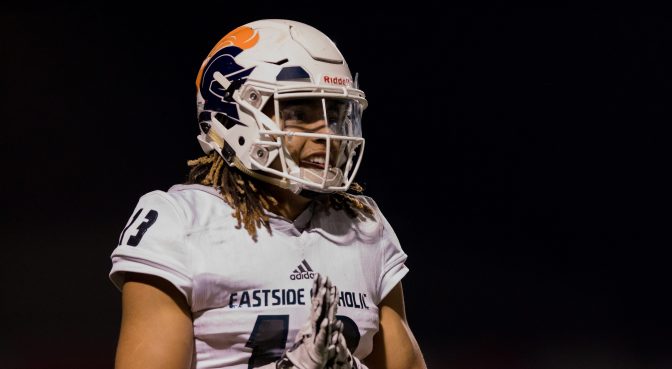 Coming off the GEICO Series win with an experienced crop of seniors and No. 1 2021 player J.T. Tuimoloau, Eastside Catholic looks to carry momentum forward with a new head coach in Dominic Daste.

Why them: On offense, quarterback Michael Franklin returns for his senior year, as do the two leading running backs in four-star Sam Adams II and Gio Ursino. The top three pass-catchers – four-star wide receiver Gee Scott Jr., four-star tight end D.J. Rogers and Adams are back as well. The offensive line is a little thin after losing the starting center and left tackle, though. It sounds like D’angalo Titialii will play an important role this year, as he played all five line positions last year and often trains opposite of Tuimoloau. Titialii could play center as guys like Matt Morgan and Will Reed take on different line positions.

The defense, led by Tuimoloau, is where Eastside Catholic makes its money. Last year, the team had 16 interceptions and forced five fumbles with an aggressive scheme that Daste thinks will allow the numbers to be replicated this year. The team is losing key pieces, though. Andrew Peterson had four interceptions and two forced fumbles. Tony Angilau was a “stick of dynamite” who decided to play rugby, not football, at the next level. But Adams had six interceptions, Ayden Hector had three, and incoming freshman Caleb Pressley is expected to produce early.

With an experienced team and the confidence from knocking off Centennial (Peoria, Arizona) in the GEICO Series game last year, Eastside could have another great season.