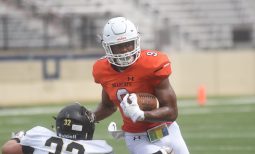 Why them: Last year, quarterback Jake Bishop completed 70.4% of his passes. Five-star running back Jase McClellan rushed for more than 2,000 yards and had 47 touchdowns. Four-star Jojo Earle had 1,090 receiving yards and 16 touchdowns as a sophomore. All that helped Aledo race to an undefeated season, going 16-0. All that is returning as one of the most competitive offenses in the country.

Other pieces are coming back, too. Three-star wide receiver Money Parks can help Early get open – and vice-versa – and on defense, Max Lucas had 91 tackles while DeMarco Roberts had 73. With that said, Aledo is losing some of its key defenders who put pressure up front, including Colt Ellison, Wyatt Harris and Will Greenwood. The team will rely on players like Oliver Crow and Weston Reese to step up in their absence.

In last year’s undefeated season, no opponent scored 30 points. Only two broke the 20-point plateau. In the two years prior, Aledo went a combined 31-1 with a championship. The team is experienced and poised under pressure. If it can find production to pressure the opposing quarterback, Aledo can once again thrive.