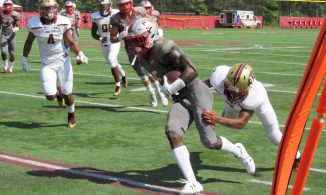 Why them: Three-star quarterback Sol-Jay Maiava and five-star wide receiver Rakim Jarrett have another year together, which means opposing teams will spend another year trying to defend a practically unguardable tandem.

St. John’s College has the top three 2020 recruits in D.C. – Jarrett and a pair of defenders in linebacker Mekhail Sherman and defensive tackle Tre Williams. In total, the Cadets have six of the top nine players in D.C. in the class. In the 2021 class is four-star defensive tackle Taizse Johnson, who will team up on the line with Williams and wreak havoc on opposing quarterbacks.

All in all, St. John’s College has eight players rated three-stars or better. Based on pure talent alone, it’s tough to envision a team in the region outperforming the Cadets.