Almont defeated Detroit Denby, 36-8, in an MHSAA Division 5 football semifinal Saturday after referees called the game because of excessive personal fouls, according to the Port Huron Times Herald.

As players were exiting the field, tension escalated as players and fans were shouting, and some Denby players were seen going up a ramp toward the platform where fans were milling.

Police officers already at the game at Walled Lake Central intervened, but additional officers from the Oakland County Sheriff’s Department and Milford Police Department were called to the site, according to the Times-Herald.

Frustration set in for the Tars, who had minus-1 yards of total offense through three quarters and did not have a first down until 6 seconds into the fourth.

Officials called the game after the aggressive play continued, and the Tars elected to not shake hands after the final whistle. 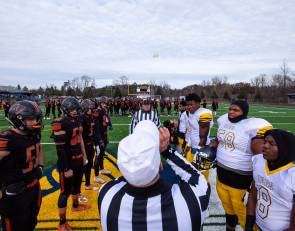 https://usatodayhss.com/2019/almont-vs-denby-football-state-semifinal-ends-early-due-to-personal-fouls-confrontations-with-crowd-follow
Almont vs. Denby football state semifinal ends early due to personal fouls, confrontations with crowd follow
I found this story on USA TODAY High School Sports and wanted to share it with you: %link% For more high school stories, stats and videos, visit http://usatodayhss.com.