The school and Scottsdale Unified School District have been investigating racial claims since February, when the district was alerted by Brian Ali, a former Arcadia assistant whose son played on the junior varsity team.

Danford and Loveski have not been able to comment during the investigation.

Ali said black players were being called out in front of teammates, while white players were not.  He said Danford told a black player to “Get a (expletive) hair cut” and used the term “breaking” to describe how he was pushing a black player. Danford allegedly told freshman players two years, “This isn’t Compton,” because of the way their pants sagged on them.

The Phoenix New Times broke the story last week about alleged racial bias by the coaches.

The Arizona Republic met Wednesday with four black Arcadia players — recent graduates James Hodge-Green and Jaylin Bibbs, and 2021 players Kieran Carr and Rashid Smith. None of them said they were interviewed by the school and the district during what is still an ongoing investigation.

All of them support Danford and Loveski, saying they never felt either of the men came across as being racist.

“I didn’t even know about (the ‘Compton’ comment) until I read the article,” said Carr, who was on that freshman team coached by Ali in 2017-18. “So I have no idea that he said it. I never heard him say anything like that.”

Ali was with the program the last two years, the first year as the freshman coach and  last season as a varsity assistant. Ali was let go by Danford late in the season after he stopped attending practice.

Owen Shaw, a Caucasian, who was a sophomore on varsity last season, said he felt that Danford was consistent with everybody as far as cracking down on keeping their  hair short.

“He would blurt it out to everyone,” Shaw said. “It wasn’t like a secret. It was in the open.”

James Hodge-Green, a recent graduate who averaged 8.5 points, 3.9 assists and 3.1 rebounds in 29 games last season, said that Danford had a strict apparel code for games, that everybody had to wear royal blue shoes.

“He said, ‘Yeah, it’s fine, if it means something to you, it means something to me,'” Hodge-Green said. “Coming into the program, he didn’t hand me anything, but I felt that made me better, because nothing is going to be given out here. I think he gave me what I deserved and made me work for what I got.”

Bibbs, who averaged three points and three rebounds, said he had his ups and downs but never felt uncomfortable around Danford and Loveski during his Arcadia basketball career.

“There’s not one part of him that’s racist,” Bibbs said of Danford.

“I never once thought of him to be racist,” Hodge-Green said. “After we won our region championship, I came down the ladder after cutting the net, and shed a tear, because I  was hugging him, knowing I would only play for him for only a few more games.” 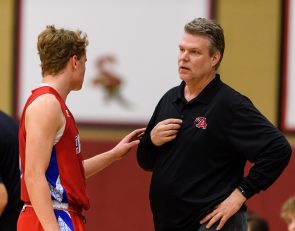