Following a breakout sophomore season at First Baptist Academy, Brady Dean was poised to become one of the top quarterbacks in Collier County in 2019.

The son of one of the best quarterbacks ever to play in Naples, Barron Collier graduate and former University of Florida star Terry Dean, the younger Dean hoped to follow in his father’s footsteps as a high school football star in his hometown.

However, thanks to his performance last season, Dean earned a chance to play at one of the best prep football programs in the country – but it requires him to leave Collier County and the only school he’s ever known.

Dean has transferred from First Baptist to St. Thomas Aquinas in Fort Lauderdale. The junior quarterback already is working out with the Raiders’ 10-time state champion football team and plans to earn the starting spot at the powerhouse program in the fall.

Brady Dean, who started at quarterback for First Baptist Academy as a sophomore in 2018, has transferred to football powerhouse St. Thomas Aquinas in Fort Lauderdale. (Photo: Submitted/Kara Heaslip)

“We still love FBA,” Terry Dean said. “The only reason we left is because (Brady) got a world-class opportunity. It’s a rare opportunity, and when it opened up, we felt it was a smart decision to go after it.”

Brady Dean threw for 1,195 yards, 12 touchdowns and 11 interceptions as a sophomore last season, his first as the Lions’ starting quarterback. In December, Terry Dean received a call from a friend in the Fort Lauderdale area who is not associated with St. Thomas Aquinas but said the school is in need of a quarterback for the upcoming season.

The Deans had never considered leaving FBA. All four children of Terry and Robin Dean have attended the school since they were in pre-kindergarten, and Terry Dean has been an assistant with the football team the past seven seasons.

However, as the family looked into Aquinas, they believed Brady could flourish with the football program. The Raiders used three quarterbacks last season, but all were seniors. With those passers graduated, the competition is wide open.

Per Florida High School Athletic Association rules, the Deans were not allowed contact with Aquinas football coaches until they applied for enrollment. After they met with the staff and toured the school, Brady was sold.

“When my dad told me I had a chance to go to St. Thomas Aquinas, I was shocked,” Brady Dean said. “My first thought was, ‘There’s no way,’ and I didn’t think about it. But the more I considered it, the more things aligned and everything came together.”

Terry Dean made sure his son understood the difficulties of going from a Class 2A program with 30 players like FBA to a football factory like Aquinas.

The Raiders play in Class 7A and had 132 players on their roster last year. Aquinas lost in the state finals last season and has won five straight regional titles, including three straight state championships from 2014-16.

“I said, ‘You might be the fourth-string QB over there,’” Terry Dean told his son. “Brady said, ‘I’m going to win that (starting) job. I want to go.’”

Terry Dean knows about competing at a high level. After graduating from Barron Collier in 1990, Dean played quarterback at Florida under coach Steve Spurrier. He was MVP of the 1993 SEC Championship game and led the Gators to a win in the Sugar Bowl as a junior.

Aquinas does not give scholarships, just need-based financial aid. The Deans did not qualify, but Terry Dean said tuition at the Catholic school is in the same price range as First Baptist.

Dean, the 6-foot-3, 186-pound quarterback, enrolled in classes at Aquinas in January. The next step was figuring out how he would attend school 106 miles away from where his family lives in North Naples.

The Deans have rented a condo for Brady in Fort Lauderdale. His mother, Robin, or his grandparents stay with him during the week. Terry Dean goes over on Thursday nights and works out of his company’s East Coast office on Fridays.

When he can, Brady Dean comes home on the weekends. The drive takes an hour and 20 minutes.

Read the rest of the story at the Naples Daily News. 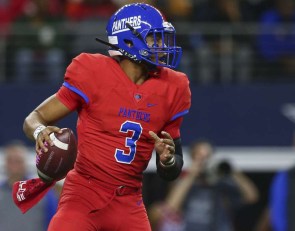 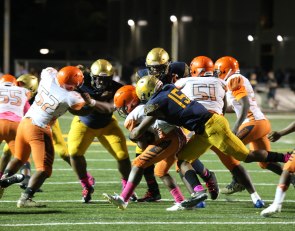